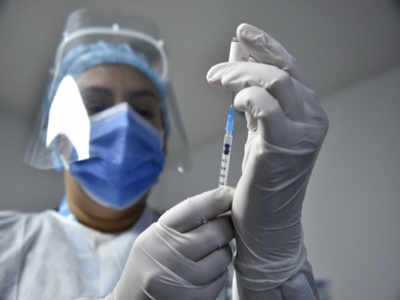 New Delhi: Nearly 98.5 lakh COVID19 vaccine doses  have been administered by Thursday. These are administered to healthcare and frontline workers.

While the countrywide vaccination drive was rolled out on January 16, vaccination of the FLWs started from February 2. Total 3,17,190 vaccine doses were given till 6 pm on Thursday. This is the thirty fourth day of nationwide COVID19 vaccination.

Out of which, 2,21,425 beneficiaries were vaccinated for 1st dose and 95,765 HCWs received 2nd dose of vaccine as per the provisional report. Final reports would be completed for the day by late tonight.

Reports said all States/UTs  have conducted the COVID vaccinations on Thursday. Eleven States/UTs have vaccinated more than 75% of the registered HCWs for 1st dose.

Reports said a total 40 persons were hospitalized so far. This comprises 0.0004% of the total vaccinations. Twenty four persons were discharged after treatment, while thirteen persons died and three are under treatment.

Two persons were hospitalized in the past 24 hours. Thirty two deaths were recorded till Thursday. These comprise 0.0003% of the total COVID19 vaccinations. Of the 32, thirteen persons died in the hospital while 19 deaths are recorded outside the hospital.

In last 24 hours, three new deaths have been reported. A57-year-old male, who was a resident of Kozhikode, Kerala died due to Myocardial Infarction. Another 51-year-old female, resident of Kolhapur, Maharashtra died due to Cerebral Infarction, known case of hypertension & Diabetes. For both of them, Post-mortem not done as per wishes of the family.

Fight Against COVID-19: Railways To Transport Oxygen By Ro-Ro Service