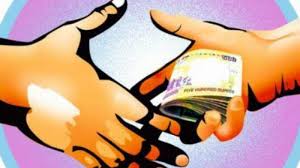 Kandhamal: Horticulture Overseer of Daringbadi in Kandhamal district landed in Vigilance trap on the charge of taking bribe.

The Horticulture Overseer, Batakrushna Kata, was caught red-handed by the officers of Vigilance, Berhampur Division for demanding and accepting a bribe of Rs.10,000 from one Pure Pradhan of Malebadi under Daringbadi Police limits.

As per reports, the accused was accepting the bribe in order to process wage list for release of labour payment under MGNREG scheme in favour of the complaint.

Acting on the complaint, officials of the anti-corruption wing laid a trap and apprehended the accused.

A case has been registered under relevant section and further investigation is underway.