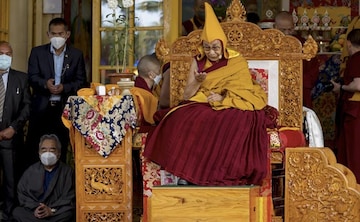 Tibet: Making his first public appearance after over two years since the outbreak of Covid, the Dalai Lama on Friday said that he is in good health and can “even play boxing with the doctor”.

While addressing a gathering, he also gave a short teaching from the Jataka Tales. This was followed by a ceremony for generating the bodhichitta (semkye) at the main Tibetan temple Tsuglakhang here.

Thousands of Tibetans, including monks and members of the Central Tibetan Administration (CTA), were part of the gathering. The CTA operates under the “Charter of the Tibetans In-Exile”.

The 86-year-old spiritual leader gave held the last offline discourse in December 2019. All his public engagements were cancelled in the wake of Covid-19 outbreak in the country in the early 2020.

He stepped outdoors only once to get his vaccine at the zonal hospital. The second dose was administered at home.

On December 17 last year, the Dalai Lama granted the first personal audience to the sikyong (president) of Central Tibetan Administration (CTA), Pempa Tsering, after the second wave of Covid-19 subsided. He also met RSS chief Mohan Bhagwat at his McLeodganj residence on December 21.

Although the Dalai Lama did not step out of his residence in these two years, he remained connected with people around the world through online teaching and public talks.

China reports first Covid deaths in more than one year