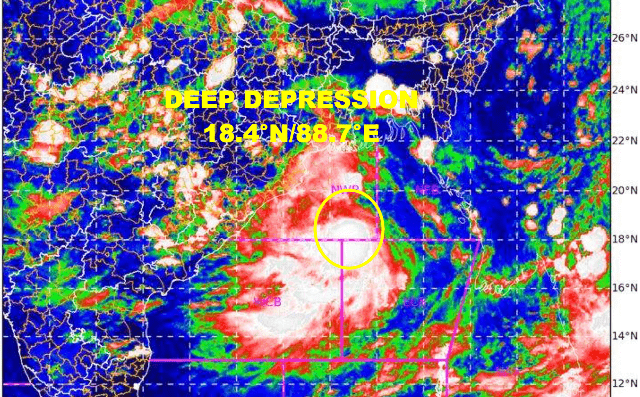 Bhubaneswar: The Deep Depression over Bay of Bengal is likely to intensify into a Cyclonic Storm during the next six hours, the India Meteorological Department (IMD) said in its evening weather bulletin.

The system is likely to move nearly westwards and cross north Andhra Pradesh and south Odisha coasts between Kalingapatnam & Gopalpur by evening of 26th September, 2021.

The Regional Met Centre has also issued Red Warning for the districts of Ganjam, Gajapati, Kandhamal, Rayagada, Nawarangpur, Koraput, and Malkangiri. These districts are very likely to receive heavy to very heavy rainfall at a few places with extremely heavy falls at one or two places between 08.30 AM of Sept 26 and 8.30 AM of Sept 27.

Heavy to very heavy rainfall at one or two places very likely to occur over the districts of Puri, Khordha, Nayagarh, and Kalahandi.

Heavy rainfall very likely to occur at one or two places over the districts of Balasore, Bhadrak, Kendrapada Jagatsinghpur, Jajpur, Cuttack, Boudh, Sonepur, Bolangir, and Nuapada.

Tidal wave of about 0.5 m height above the astronomical tide likely to inundate low lying areas of Ganjam districts during the time of landfall.

Fishermen are advised not to venture into sea, along & off Odisha, coasts northwest & adjoining westcentral Bay of Bengal till 27th September, 2021.

Another 601 COVID-19 patients recover in Odisha