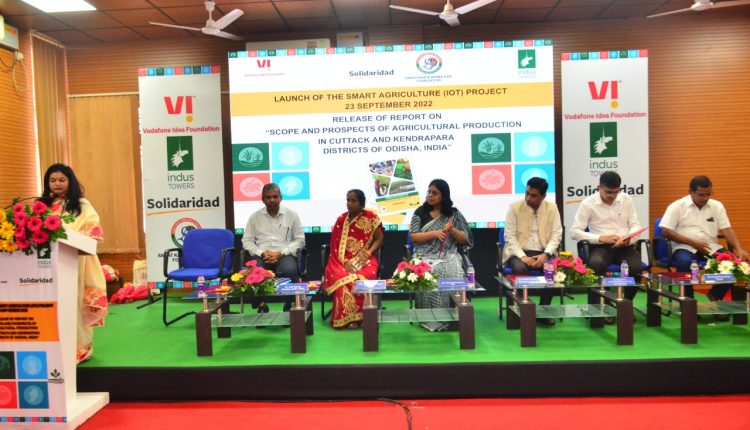 The Smart-Agri project over the next 3 years will directly benefit 50,000 smallholder farmers. The project will further collaborate and complement several good works done by the state and central Governments to bring benefits to the entire farming population in these two districts. Solidaridad and Idea-Vodafone Foundation has initiated similar interventions in the Gajapati district as well. Eventually, the ambition is to create several smart agricultural districts in Odisha. The interventions are expected to create a significant increase in farming incomes and create new rural employment options for the local youth as tech-savvy young agri-entrepreneurs.

The program is expected to transform the conventional agriculture followed in Odisha into smart agriculture. The project will use the Internet of Things (IoT), Artificial Intelligence (AI), and real-time technology solutions routed through automatic weather stations, soil probes, insect traps, and crop cameras which will be installed. It will provide farmers with information on critical elements of farming – like soil and air quality, wind, the presence of insects and pests, and crop growth. Farmers also receive real-time and localized advisories on critical agri-inputs for their crops and agricultural news on markets, government policies, schemes, etc. They will receive this in the Oriya language via their mobile phones, with audio options, in case reading is a challenge.

The project is the outcome of year-long research conducted by Solidaridad and the SKAK Foundation on the food production system in the two districts. The report was launched by the dignitaries& the farmers present at the event. The report provides different recommendations for improving the income of the farmers through climate-resilient farming.

Dr. Shatadru Chattopadhayay, Managing Director of Solidaridad for Asia, said: “Odisha is an Agrarian State. Almost 70 per cent population of the State is dependent on agriculture. However, traditional agricultural practices are leading to low income and increasing their vulnerability to higher frequency and intensity of extreme weather events like heatwaves, floods, and storms. Investment in smart agriculture is the best mechanism to make life better for millions of farmers in Odisha. To cope with them, different interventions in this project will empower the farmers in these two districts, and they will be able to grow their incomes and improve their livelihood. I sincerely believe that the farming system in Odisha in this decade will transition into a modern and market-oriented professional, and sustainable system”.

Dr. Nilay Ranjan, the head of Idea-Vodafone Foundation shared “Using technology, Vodafone Idea Foundation’s SmartAgri project is transforming farming practices in India, instilling confidence in farmers to use technology and ‘intelligent’ solutions to improve productivity. Our technology intervention has resulted in increased yield, better crops, and increased profits for the farmers bringing about a social impact in the Indian agriculture space. We are now happy to further expand the project in Odisha.”

Speaking on occasion, Mr. Sobhan Kar the head of SKAK Foundation shared, “we express our gratitude to Solidaridad for having chosen Odisha as its next destination of meaningful work in the agricultural sector. We are optimistic that the partnership between Solidaridad and Sarat Kar & Anima Kar Foundation would contribute to the welfare of farmers in Odisha. The focus of the partnership would be on gender inclusivity and smart use of technology to augment production and enhance income”