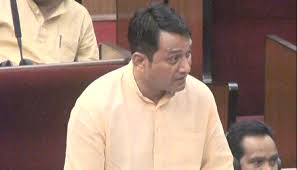 Bhubaneswar: The State government on Wednesday decided to hand over the murder case of a five-year-old girl Pari of Jadupur village in Nayagarh district to the Crime Branch. This was informed by the Minister of State (Home) Captain Dibya Shankar Mishra in the state Assembly.

Mishra said, “Nayagarh Sadar police had registered a case under Sections 363, 364, 302, and 201 of the IPC on the basis of a complaint lodged by the deceased’s parents.”

As many as 34 suspects have so far been questioned while four persons underwent polygraph test at the State Forensic Science Laboratory in connection with the case and now, it has been decided to hand over the investigation to the state Crime Branch, said the Minister in the House.

The matter came to limelight on Tuesday after the deceased girl’s father Ashok Sahoo and mother Saudamini attempted self-immolation outside the Odisha Legislative Assembly demanding justice for their daughter.

Notably, on July 14, Pari was reportedly abducted when she was playing outside her residence in the village. However, she remained untraced for ten long days. Later, the minor girls’ bones and body chopped in parts, stashed in a sack, were found dumped in the backyard of their house.