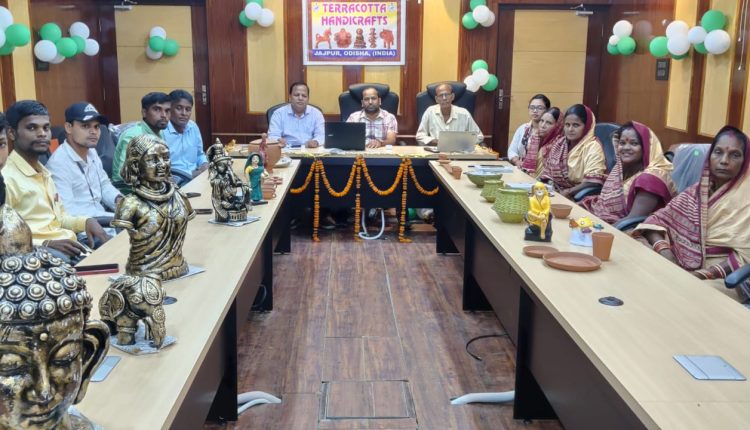 Jajpur: Terracotta craft persons and sculptors from Odisha’s Jajpur district along with the District officials, attended a virtual International Capacity Enhancement Workshop for artisans and craftsmen with the UNESCO Creative Cities Network. The workshop was organized by the UNESCO creative city Chiang Mai in Thailand between the 3rd and 5th August 2022, with more than 500 participants from around the world. The workshop aimed to strengthen sister city collaboration among the global creative cities. This event was a part of the activity to develop creative cities and districts at the international level.

Jajpur was the only city from India which was invited to participate in the event and showcase its rich culture and craft traditions. Other cities that presented at the Conference included Chiang Mai (Thailand), Tamba Sasayama (Japan), Baguio (Philippines), Kutahya (Turkey), Jingdezhen, and Weifang (China), and Manises (Spain). The workshop featured renowned artists, designers, craft persons, academia, and policymakers. Prominent craft persons shared their work and discussed how it impacts the communities around them. In addition, this event brought together the leadership of Creative Cities to raise awareness about their work.

In a dedicated session, Jajpur’s delegation presented the District’s profile with particular emphasis on arts and crafts. The artisans also shared information on the genesis of the craft, its socio-cultural importance, processes, knowledge transmission, the role of stakeholders, and the measures taken for safeguarding the crafts.

Mr. Chakravarti Singh Rathore (IAS), Collector and District Magistrate of Jajpur District, congratulated all artisans and District officials for their successful participation in the workshop. Mr. Rathore explained that Participation in such an event will boost the confidence of our dynamic art and craft community and help Jajpur be a hub of creativity.

Mr. Rathore further adds that “the Jajpur District administration is taking several initiatives to recognize weavers and craft persons. The District has developed collaborative engagement with a number of UNESCO Creative Cities for sister city collaborations and knowledge exchange. The District will continue similar exchanges through the International Craft Summit and exhibitions.” Moreover, “The District has lined up multiple master craft persons from UCCN Creative Cities to participate in Boot Camp program, which will be a series of international craft boot camps beginning in October this year.”

Artisans and Women SHG members thanked the District administration for their sustained efforts to revive crafts and recognize the artisan community.Ms. Jayanti Behra, 45-year-old, terracotta craft person of PrathmaKhandi Gram Panchayat of Jajpur District said that she is thrilled to receive an ovation from UNESCO Creative Cities. She says  “I have been practicing the terracotta craft for the last 20 years; this is the first time that I have spoken to an international audience. I felt overwhelmed when the participants appreciated my work”

It is noted that Jajpur District of Odisha is famous for its various arts and crafts, including Tussar handloom, Terracotta, Golden Grass, and stone works.