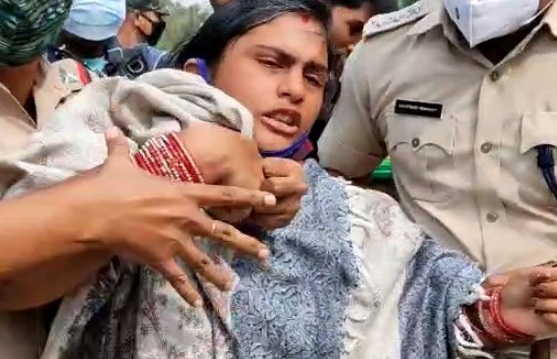 Bhubaneswar: In a shocking turn of events, a couple from Jadupur village of Nayagarh district allegedly attempted to commit suicide outside the high-security zone of Odisha Assembly in Bhubaneswar.

The couple, identified as Soudamini Sahu and Ashok Sahu (parents of a deceased 5-year-old girl) all at once appeared before the heavily guarded zone outside the Assembly and started pouring diesel on their body. Security personnel deployed outside the hurly-burly Odisha Assembly today successfully aborted a self-immolation bid by the couple.

According to available reports, the bereaved couple demanded justice for their daughter’s death and also asked for security for themselves.

Notably, the 5-year-old girl was kidnapped in July and later the girl’s skeletal remains were recovered from the backyard of her house on July 20.

Ashok had earlier alleged, “The culprit kidnapped my little girl and dumped her body after and used chemicals to decompose it.”