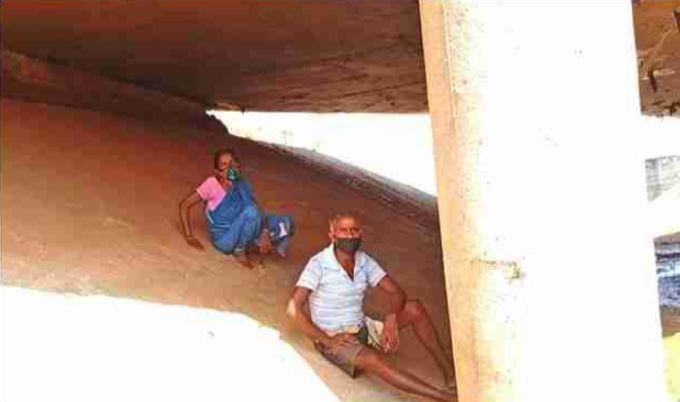 Mayurbhanj: While Covid-19 cases continue to rise across Odisha, the poverty-stricken populace of the state are facing the heat of the pandemic the most.

Such an incidence has been reported from Nuagaon area under Maroda block in Mayurbhanj district.

Though The Odisha government is spending crores of rupees to manage the Covid situation, the local administration is being blamed for their lackadaisical attitude. Reportedly, a coronavirus-infected person was forced to live under a bridge here after allegedly being ignored by the administration.

The patient’s elderly mother and the man himself spent their days under the pole as the area lacked quarantine facilities.

As per reports, one Bhupati Mohanty (45) of Nuagaon area complained of respiratory issues on Wednesday night following which he was taken to Kisanatandi CHC through an ambulance. Bupati’s mother Sampati Mohanty (72) was also present with him.

On Thursday morning Bhupati went through Covid testing and the results came out to be positive. He was then shifted to PRM Medical college’s covid ward. However, while being taken to home, the ambulance dropped off the mother-son duo near Nuagaon-Pulajhara road.

The duo also faced the harsh wind and rain during their stay here.

On Monday, locals and passersby spotted the trouble-stricken duo and immediately alerted the village sarpanch and ASHA worker about the same.

However, both the sarpanch and ASHA worker remained mum over the incident.

Upon repeated requests by the villagers, the Panchayat Committee members brought the duo and let them stay at a clubhouse (as a quarantine home).

Upon being asked, an official at Kisanatandi CHC informed that Bhupati did not show significant covid symptoms and later asked to be discharged to home. However, the officials will send another ambulance to bring him to the hospital if he agrees.

The situation that trapped Bhupati and his elderly mother has not only raised eyebrows but has also popped up as a question for the administration’s Covid management skills.