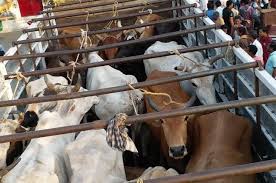 Balasore: Simulia police today rescued as many as 106 cattle while the animals were allegedly being trafficked in 6 pickup vans.

Acting on a tip-off about the cattle trafficking, the cops intercepted the pickup vans near from College Chhak area on NH-16. Besides rescuing the animals, police have seized the six vehicles.

The accused were illegally transporting the cattle in the vehicles to West Bengal. While one driver has been detained in this connection, five others managed to flee the spot.

Further investigation in the matter is underway.