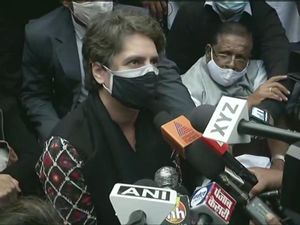 New Delhi: Congress MPs have taken out a march headed by Rahul Gandhi against the farm laws on Thursday.

The Congress leader Priyanka Gandhi has criticized the Modi dispensation on the farm laws saying any dissent against the BJP  government is being dubbed as anti-national. She said they are on the march to voice their support for the farmers.

Worthwhile to mention that the farmers’ agitation in the national capital has entered 29th day on Thursday. The farmers’ unions have asked the government to prepared a new concrete proposal for resumption of talks with them.

The Union Agriculture Minister Narendra Singh Tomar has said talks are the only way for a solution and the government is committed to reforms in the farm sector.

The Congress party will hand over a memorandum signed by two crore farmers to the President Ram Nath Kovind for his intervention on the withdrawal of three farm laws.