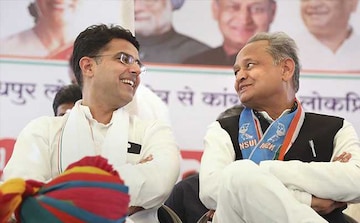 Jaipur: Leaders from Congress’ central leadership will hold one-on-one meetings with MLAs from Chief Minister Ashok Gehlot’s camp to find a way out of the crisis in Rajasthan, where infighting has brought the state government to the brink of a collapse again.

Senior Congress leaders Ajay Maken and Mallikarjun Kharge are in Jaipur to resolve the current impasse after over 90 MLAs loyal to Mr Gehlot have threatened to resign if the Chief Minister’s post goes to his bitter rival Sachin Pilot.

Mr Pilot is the high command’s choice for the top post if Mr Gehlot wins the election for the Congress president post. While prominent leaders such as Shashi Tharoor and Manish Tewari are also contesting the polls, the Rajasthan Chief Minister is a frontrunner.

Mr Gehlot has been reluctant to vacate the Chief Minister’s post for Mr Pilot, and had earlier said there was no hurdle to him holding on to the post even if he was elected Congress president.

However, he changed his stand after Congress leader Rahul Gandhi stressed that the party would stick to the “one man one post” rule as decided upon at the top party meet in Udaipur this year.

Amid yesterday’s developments, Mr Gehlot said that the matter is not in his hands as the MLAs are angry and not ready to back Mr Pilot for the Chief Minister’s post. Despite his claim, it seems unlikely that the legislators would go this far without his blessing.