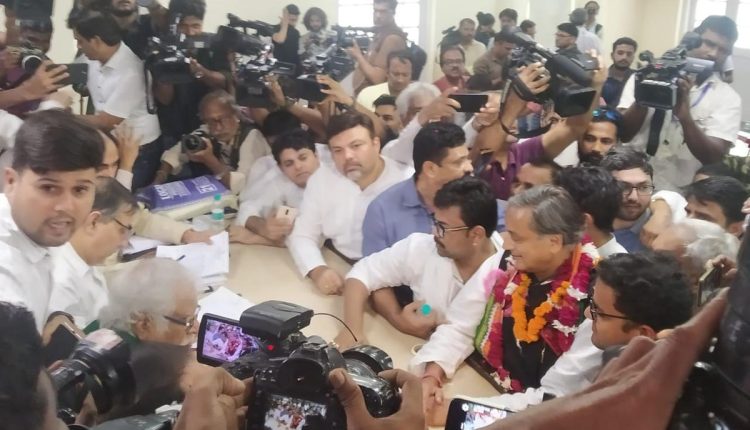 New Delhi: Senior Congress leader and MP Shashi Tharoor on September 30, 2022 filed his nomination for the post of party president at the office of the All India Congress Committee (AICC) in New Delhi.

Ahead of filing his nomination, Mr. Tharoor visited Raj Ghat to pay homage to Mahatma Gandhi.

Meanwhile, Mr. Tharoor will be addressing press conference at his residence. “I have already submitted five nomination forms with signatures of 10 delegates each. And in the process of submitting a sixth form” Among Kerala MPs only MK Raghavan has signed on his nomination form.

Asked about Mr Sharma, Mr Chavan and Mr Digvijaya Singh being in Mr Kharge’s nomination, Mr. Tharoor says, ”This tells you a story”. He adds that if the delegates want status quoist, then they must vote for Mr Kharge and if they want to vote for reforms, they must vote for me.

Mr Tharoor said he will go by the assurance of neutrality given by Congress chief Sonia Gandhi.

Congress veteran Mallikarjun Kharge said he is also throwing his hat into the ring. “I am going to file my nomination (for Congress president post)”, Mr. Kharge told media persons as he left for the AICC headquarters.

Mr. Kharge filed his nomination in the presence of Ashok Gehlot, Anand Sharma, Prithviraj Chavan among others

Mr Sharma and Mr Chavan are members of the ginger group or G-23 that has written to Sonia Gandhi for internal reforms. Mr Tharoor was also signatory to the 2020 letter.

“Nominations for top awards is a reassurance that the team is moving in the right direction,” says experienced striker Vandana Katariya