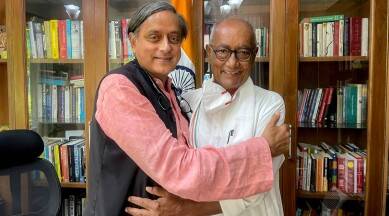 Jaipur: Senior Congress leaders, Shashi Tharoor and Digvijaya Singh will file their nominations for the upcoming party president polls today. Singh entered the fray as Rajasthan Chief Minister Ashok Gehlot opted out of the race and the suspense over his continuation at the helm in the state deepened with the party saying a decision would be taken in a day or two. One of the AICC observer for Rajasthan Mallikarjun Kharge is also in the running. The names of Mukul Wasnik and Kumari Selja are also doing the rounds.

Meanwhile, former Rajasthan deputy chief minister Sachin Pilot on Thursday night met Congress president Sonia Gandhi and said he discussed the events in the state in detail and expressed his sentiments on the situation. Speaking to reporters, Pilot said, “Have discussed the events of Jaipur in detail. I have conveyed my sentiments and feedback to Congress president Sonia Gandhi. We all want to work hard and win the 2023 elections in Rajasthan. For that, we will need to work together.”

Pilot’s meeting comes hours after his bete noire and Chief Minister Ashok Gehlot had met her and later announced that he would not contest the Congress presidential poll after taking moral responsibility for the political crisis in his state. Gehlot also said the decision on whether he would remain CM would be taken by Gandhi.

Allu Arjun Visits Wagah Border With His Family; Says, ‘What An Honour’