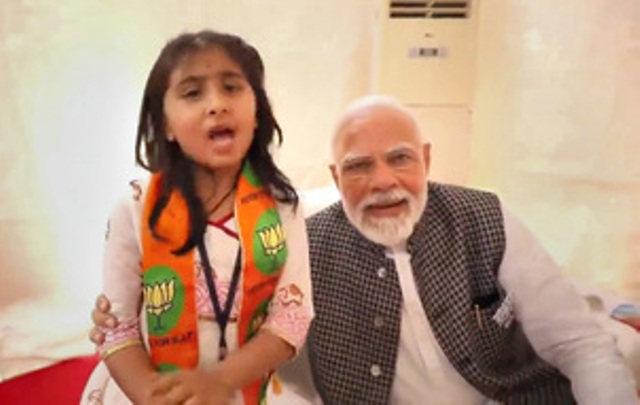 New Delhi: The Congress on Tuesday filed a complaint with the National Commission for Protection of Child Rights (NCPCR) against Prime Minister Narendra Modi and the BJP for using children for their political campaign in the run up to the Gujarat assembly polls.

The complaint was filed by the Congress’ social media department chairperson Supriya Shrinate to the chairman of the NCPCR Priyank Kanoongo, after the prime minister shared a video in which a girl was seen speaking about BJP’s governance in Gujarati.

”We have lodged a complaint before Priyank Kanoongo of NCPCR against misuse of children for election and political campaigns by PM Modi in Gujarat. Have also marked a copy to the Election Commission for violation of the model code of conduct. Mr Kanoongo, you have been conspicuously quiet. Why?” she asked on Twitter while sharing her complaint.

AICC general secretary Jairam Ramesh said, ”This is an open and shut case of violation of child rights and misuse of children for electioneering by the PM himself. NCPCR and EC are on a severe test now.” In her complaint to the NCPCR, Shrinate accused the BJP and Narendra Modi of ”misusing minor children for election and political campaign” during Gujarat assembly elections.

Alleging that these actions are not only illegal under the law but are also in clear violation of the NCPCR and the Election Commission’s instructions, she hoped that the Chairman of the Commission would take strict action in the case at the earliest.

”The impugned video with the minor child singing and campaigning for BJP has been endorsed (through re-tweets) and shared across various social media platforms, thereby making it amply evident that the said video and the minor child therein are being used for election campaign of BJP by Shri Narendra Modi ji.

”The election commission of India and other quasi judicial bodies have time and again advised against the use of children as political actors/agents/mascots in any form or fashion for election campaigns,” she said in her complaint.

Breaking
10 Suspected Terrorists Killed In Encounter In Balochistan Stage Set For ‘Make In Odisha Conclave’ From Today FIFA WC 2022: Senegal advances to knockout round with 2-1 win over Ecuador FIFA World Cup 2022: Netherlands beats Qatar 2-0 to finish atop Group A Odisha W&CD Dept inks MoU with American Indian Foundation to implement Integrated Programme for Chil... Maternal Mortality Ratio Dips To 97 In 2018-20 From 130 In 2014-16 SEBI Introduces Credit Risk Based Investment Limit For Actively Managed Mfs In Debt Instrument BCCI Serves Conflict Of Interest Notice To Its President CM Naveen To Descend On Padampur Battlefield On Dec 2 Teachers To Intensify Stir As Talks With Govt Remain Inconclusive
Sign in
Sign in