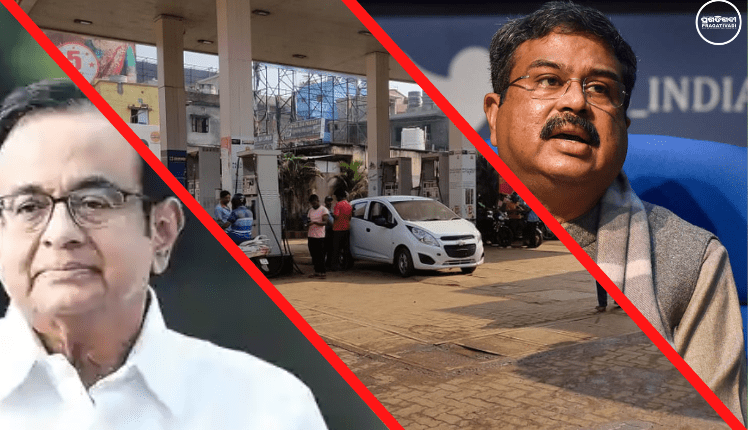 New Delhi: While some days ago, opponent parties were slamming Narendra Modi led NDA government for the increased price of fuels, now sarcastic swipes from Congress over this have created virtual clangs for BJP.

After weeks of steady hikes, the central government decided to cut petrol and diesel prices – by Rs 5 and Rs 10, respectively. Launching a sarcastic attack on BJP, senior Congress leader P Chidambaram has linked it to the saffron party’s debacle in by-polls held last week for three Lok Sabha and 30 Assembly seats.

The centre has cut excise duties on petrol and diesel!

Chidambaram called the fuel price cuts a “by-product of by-elections” and said it confirmed his party’s position – that skyrocketing petrol and diesel prices were the results of high taxes, and that the high taxes were the result of the “greed of the central government”.

In states where the Congress won, it did so with a significantly higher vote share:

“The results of the 30 Assembly and 3 LS by-elections have produced a by-product… The centre has cut excise duties on petrol and diesel!” the Rajya Sabha MP tweeted today.

Retaliating over the same, former Petroleum Minister in NDA I and now Education Minister Dharmendra Pradhan said that the Modi government “stands for being with the people in their happiness as well as in grief”.

If the accusation is being sensitive to people’s demand and sharing their sorrow, we happily accept it as the #ModiGovt stands for being with the people in their happiness as well as in grief. https://t.co/6AjBOtWqFR

On Tuesday, the BJP was beaten by the Congress in Himachal Pradesh (losing one Lok Sabha and three Assembly seats) and swept away by Bengal’s ruling Trinamool (four Assembly seats). BJP was also lost prestige battles in Karnataka and Haryana.

Loot Motive Behind Attack On Woman, Daughter In City: 2 Including Prime Accused Held

ICC Player Of The Month Nominations For October Announced