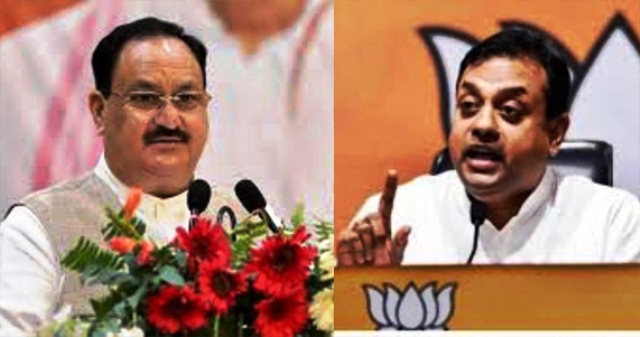 Earlier today, Congress had said that it would register a case against BJP president J.P. Nadda and spokesperson Sambit Patra after the latter slammed the Opposition party for allegedly attempting to dent Prime Minister Narendra Modi’s image with the help of what it called “Congress toolkit”.

Rajeev Gowda Chairman of the research department of the All India Congress Committee (AICC), tweeted: “BJP is propagating a fake “toolkit” on “COVID-19 mismanagement” & attributing it to AICC Research Department. We are filing an FIR for forgery against @jpnadda & @sambitswaraj When our country is devastated by COVID, instead of providing relief, BJP shamelessly concocts forgeries.”

Earlier, Mr. Patra, in a tweet, claimed that Congress had instructed its social media volunteers to use the term ‘Modi strain.’

Flashing papers from an alleged Congress document on its strategy for the campaign on Covid-19 mismanagement, party spokesperson Sambit Patra slammed the Opposition party’s direction to party workers to “use resources created on social media to question Modi’s incompetence from handles which look like Modi or BJP supporters”.

The official handle of the Congress, using the hashtag #BJPLiesIndiaCries, tweeted: “If BJP had spent as much time & effort in helping people, they wouldn’t have to spread lies about the people who are doing their jobs for them. It is a shame that our govt is more interested in maligning the opposition than protecting our people”.

Earlier, Patra read out extensively from the purported document. He was particularly peeved at the portion of the document, which allegedly said, “the approval ratings of the Prime Minister have been very high and have not dipped despite crisis and mismanagement. This is an opportunity to destroy his image and erode his popularity.”

Patra said it is “disgusting to say the least ..Rahul Gandhi wanting to use this opportunity of Pandemic to destroy the image of PM Modi. Congress workers were instructed to call the mutant strain the ‘Modi strain’”.

Patra also alleged that “no stone left unturned to scar the name of India with the help of foreign Journalists”, citing references from the document, which also purportedly said, “international media coverage by foreign correspondents in India can be tailored to exclusively focus on Modi and his mismanagement. Liaise with foreign journalists and Indian Oped writers in foreign publications and brief them on talking points.”

“Friends look at the #CongressToolKit in extending help to the needy during the Pandemic! More of a PR exercise with the help of “Friendly Journalists” & “Influencers” than a soulful endeavour. Read for yourselves the agenda of the Congress: #CongressToolKitExposed,” Patra tweeted.