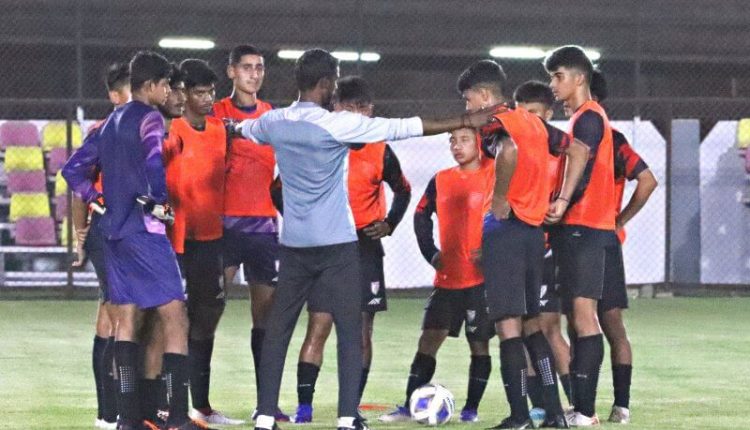 AL KHOBAR, SAUDI ARABIA: A confident India U-17 Men’s National Team will be looking to take on the Maldives in their first match of the AFC U-17 Asian Cup 2023 Qualifiers Group D, at the Prince Saud Bin Jalawi Sports City Stadium in Al Khobar, Saudi Arabia, on October 4.

The Group D campaign has already gotten underway, with Kuwait and hosts Saudi Arabia defeating the Maldives and Myanmar, respectively; both matches ended with a margin of 6-0 in favour of the victors.

India head coach Bibiano Fernandes feels that his boys are confident, heading into their first game of the qualifiers.

“We are confident that we can put out good performances in these qualifiers. It is a completely new batch our course, and these boys have not had as much exposure as the last two batches due to COVID, but they are still a bunch of talented boys who have come a long way since we began the camp in February,” said Fernandes.

Maldives may have lost their first match 0-6 against Kuwait, but Fernandes feels that his boys will start from square one against them, and that they would have to be on their guard.

“We have seen Maldives in the SAFF U-17 Championship in Sri Lanka, and in yesterday’s match as well. They have lost by a big margin, but it can be tricky against a team that has just had such a result. Such results can often jolt the players into action, and we need to be on our guard against them,” he said.

Having said that, the head coach has full faith in his boys to go out and get the job done.

Maldives head coach Ahmad Shareef feels that development, and not results, are the most important thing for his side.

“I’d like to thank the organisers for hosting us in these qualifiers. I am sure everyone has worked hard, as have our players. Our preparations may not have been as extensive as we would have liked, but the main focus for us is to get these boys ready for the next level. For us, the development aspect is very important, and these matches are crucial for that,” said Shareef.

India’s match against the Maldives will kick off on Tuesday, October 4, at midnight IST. A total of 43 teams will be participating in the AFC U17 Asian Cup 2023 Qualifiers across 10 groups. The 10 group winners will guarantee themselves a spot in the competition, while six best second-placed teams will also join them in 2023.

Group D has five teams, which means that the points earned and goals (scored and conceded) against the fourth and fifth placed teams will not be considered, while calculating the six best second-placed teams across the 10 groups, since Group H has only three teams.