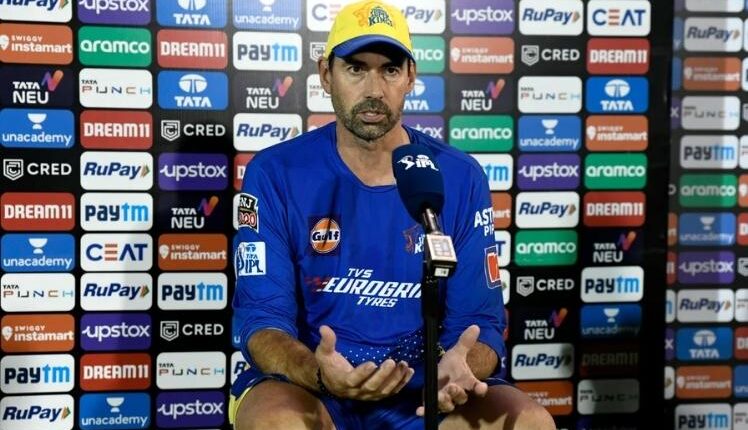 Chennai: Chennai Super Kings’ head coach Stephen Fleming said the conditions were tough with the onset of dew in the game against Lucknow Super Giants.

“If you’d looked earlier on, spinning options were taken out of play. Because it was like Niagara Falls in terms of the wetness and they played well. So it was very hard to, one, grip the ball for a spinner and, two, to be effective. So early on, we were one over short but they played well. We always knew we had to pick up an over somewhere – we were hoping to be able to create enough of a run-rate towards the end that we could squeeze someone in,” said Fleming at the post-match press conference.

“Whether that was another spinner, the decision was made in the middle to use Dube, and they counted it well. So we always knew that one over was going to be pivotal and I think they did as well, but they played it very well.”

“We’ve got some young guys – playing Mukesh for the first time, Deshpande has played a little bit before. But I thought it was really honest. It’s really tough out there – you can’t appreciate how wet that ball is and the outfield is. So it’s very difficult to get any aggressive play, I think we were bowling defensively from about 10 overs onwards. I thought they hung in really well, and started really well in tough conditions.”

“We thought it was about par, and that’s the nature of the conditions at the moment – they very much favour the team batting second. We did well to get to 210, but we were always realistic that it was going to get harder as the night went on. So we worked very hard to stay in the game, to be honest. Defensively, I thought we were great. After about 10 overs, we just knuckled down and I thought we were fantastic to stay in the game. But it’s pretty hard fielding second at the moment.”