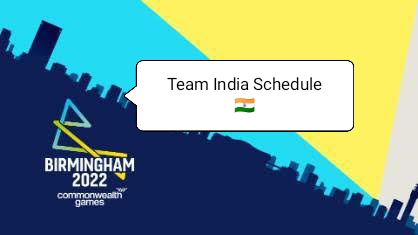 Birmingham: The timetable for the third day of the Commonwealth Games 2022 is out for India. After some phenomenal performances on Day 2 by the Indian contingent, including Mirabai Chanu’s Gold and CWG record, Sanket Sargar’s historic silver medal and Gururaja Pujary’s epic bronze, it’s time for another power-packed day for India.

Medals from Sanket Sargar and Gururaja Pujary were the iconic moments from the day, but there were some spectacular performances in the other events as well. India defeated Sri Lanka 5-0 in badminton, while Joshna Chinappa and Sourav Ghosal won their squash matches.

Women’s Cricket (3:30 PM) — Group A clash between India and Pakistan