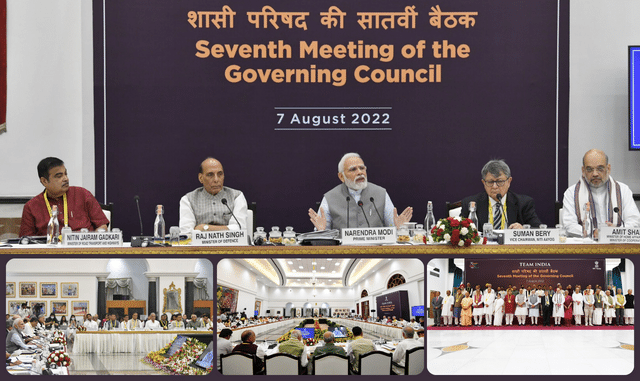 New Delhi: Prime Minister Narendra Modi on Sunday heralded the collective efforts of all the States in the spirit of cooperative federalism as the force that helped India emerge from the COVID-19 pandemic.

Addressing the seventh meeting of the Governing Council (GC) of NITI Aayog, the Prime Minister said, “Every State played a crucial role according to its strength and contributed to India’s fight against Covid. This led to India emerging as an example for the developing nations to look up to as a global leader.”

This was the first physical meeting of the Governing Council since the onset of the pandemic, with the 2021 meeting held via video conferencing. The meeting was attended by 23 Chief Ministers, 3 Lieutenant Governors and 2 Administrators and Union Ministers. The meeting was moderated by Defence Minister Rajnath Singh.

In his inaugural address, the Prime Minister said India’s federal structure and cooperative federalism emerged as a model for the world during the Covid crisis. He said that India had sent a powerful message to the developing nations of the world—that it is possible to overcome challenges with resilience despite resource limitations. The PM said that the credit for this goes to the State Governments, which focused on grassroots delivery of public services to the people through cooperation across political lines.

The Prime Minister highlighted that the seventh meeting was a culmination of months of rigorous brainstorming and consultations between the Centre and States to identify national priorities. “All Chief Secretaries met together in Dharamshala and over three days, deliberated issues of national importance. This collective process led to the development of the agenda for this meeting,” the PM said.

(i) crop diversification and achieving self-sufficiency in pulses, oilseeds and other agri-commodities;

(iii) implementation of National Education Policy in higher education; and

The Prime Minister highlighted the importance of all of the above issues, especially the need for India to focus on modernized agriculture, animal husbandry, and food processing to become self-sufficient and a global leader in the agriculture sector. He said rapid urbanization can become India’s strength instead of weakness by leveraging technology to ensure ease of living, transparent service delivery, and improvement in the quality of life for every citizen of urban India.

The PM also spoke about India’s G20 presidency in 2023 and called it a unique opportunity to show the world that India is not just Delhi—it is every State and Union Territory of the country. The PM said we should develop a mass movement around G20. This will allow us to identify the best talent available in the country. He also said there should be a dedicated team for G20 in the States to derive the maximum possible benefit from this initiative. Speaking about this, the Union Minister of External Affairs, Shri S. Jaishankar, said, “The G20 Presidency presents a great opportunity and a great responsibility. For the first time in the history of G20, India will host the G20 meetings over the year, not only in Delhi, but in every State and Union Territory.”

While highlighting several initiatives undertaken to boost learning outcomes, capacity-building of teachers, and skilling, Union Minister of Education, Dharmendra Pradhan, thanked and requested further support of the States for the successful implementation of the National Education Policy.

Vice Chairman, NITI Aayog, Suman Bery, reiterated that India’s transformation has to take place in its states. He reaffirmed the need for the combined efforts of the Centre and States to realize the vision of a resurgent India post the pandemic.

Every Chief Minister and Lt Governor present at the meeting addressed the meeting, highlighting the priorities, achievements, and challenges of their respective States and Union Territories with a special focus on the four key agenda items.

In his closing remarks, the Prime Minister said that each state should focus on promoting its 3Ts, Trade, Tourism, Technology, through every Indian Mission around the world. He said the States must focus on reducing imports, increasing exports and identifying opportunities for the same in every state. “We should encourage people to use local goods wherever possible,” he said. ‘Vocal for local’ is not the agenda of an individual political party but a common goal, he said.

The PM said even though GST collection has improved, our potential is much more. “Increasing GST collection requires collective action by the Centre and States. It is crucial for strengthening our economic position and becoming a USD 5 trillion economy,” he said. Speaking on the National Education Policy, the PM said the NEP has been formulated after considerable deliberations. He said we should involve all stakeholders in its implementation and develop a clear, timebound roadmap for the same.

He expressed his gratitude to the CMs and LGs for participating in the meeting and sharing their views and experiences. He said NITI Aayog will study the states’ concerns, challenges, and best practices and subsequently plan the way forward. He said the issues discussed in this meeting will define the national priorities for the next 25 years, adding that the seeds we sow today will define the fruits reaped by India in 2047.

US Navy Ship Arrives In India For Repair Services