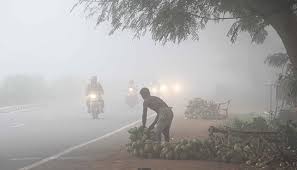 Bhubaneswar: Most parts of Odisha will record a dip in nighttime temperature till February, the India Meteorological Department’s regional centre (IMD) said.

While the India Meteorological Department (IMD) has predicted that the ongoing cold wave condition in Odisha will continue till January 19, a Met expert claimed that the state will continue to experience the winter chill till February 1.

The intense cold wave condition will prevail in North India and some parts of the north-east and the eastern region, including Odisha, said the Met official.

However, there will be a slight change in the weather condition with a change in the wind direction due to the formation of a high-pressure area over Central India, added the official.

Under the influence of the high-pressure, the cold wave condition in Odisha will recede in the next 48 hours from January 19 with a marginal increase in the night temperature. But as the high pressure is most likely to drift in a few days, the winter chill will continue in Odisha with a constant fluctuation in the night temperature till February 1, the official predicted.

While there will be no significant change in the cold wave condition in Odisha till January 19, there will be a rise in the night temperature by about 3-4°C in the interior districts of Odisha and about 2°C in coastal Odisha from January 20.

Besides, shallow to moderate fog will be seen at one or two places over the districts of Cuttack, Kendrapada, Bhadrak, Koraput, Malkangiri, Rayagada and Kalahandi in the next 24 hours.

As per the temperature recorded till 8.30 am Sunday, Phulbani was the coldest in the state with the mercury hovering at 5°C. Five more places recorded night temperature below 10°C including Daringbadi (8), Jharsuguda (8.2), Balangir (9), Boudh (9) and Sonepur (9.8).