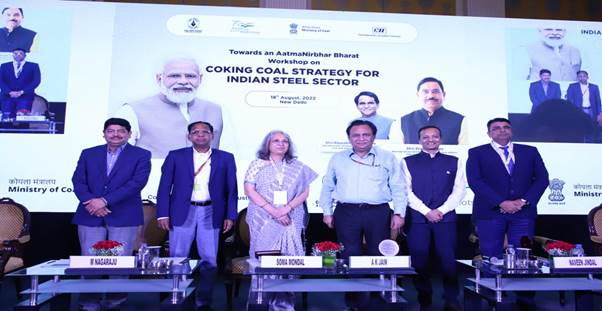 Joshi was addressing a workshop on “Coking Coal Strategy for Indian Steel Sector” moving towards an Atmanirbhar Bharat, organised by the Ministry of Coal, the Coal India Limited (CIL), and the Confederation of Indian Industry here today. Speaking on the occasion, the minister stated that there has been increase in import of coking coal in the last few years although  domestic coking coal production also increased to 51.7 million  ton.

This year in 2022-23 in the first quarter the growth in coking coal production was 26%.   The coking coal block auction did not receive good response from industry and Ministry of Coal is keen to understand the issues faced by industry in this regard. The minister urged to find technology solution and powerful strategies for using available coking coal in the country which will help the sector aligning with the Prime Minister’s five-point vision towards an Atmanirbhar Bharat.

The policy enablers are in place mainly with the amendments of MMDR Act with respect to relaxation of norms for private sector in allocation of coking coal mining blocks, exploration norms, and 50% rebate for coal gasification, among others. Government is ready to bring in place all measures to enhance coking coal production, the minister added, with the abandoned coal blocks being sought from PSUs to be auctioned and rolling auction in commercial coking coal blocks.

There are nine new coking coal washeries having capacity 30 million ton to be set up by Coal India Ltd  (CIL) and necessary infrastructure reform has been made for the same.

Sanjay Singh, Secretary, Ministry of Steel made a narrative on domestic coking coal production while highlighting the dichotomy of coking coal. The steel sector needs 60 million ton coking coal, 90% of which is met through imports. The ministry has initiated working on a strategy for having domestic coal use in blast furnaces and washeries and increase domestic coal blending to 25-35%. Shri Singh suggested increase in consumption and scrap generation as short-term strategy and four-time production increase in the longer-term for lowering dependence on iron ore and coking coal.

A K Jain, Secretary, Ministry of Coal too acknowledged the significant progress in coking coal production. Highlighting Government’s mission strategy for augmenting coking coal, Shri Jain said, coking coal is a fuel for the steel sector and reforms are needed to track investment in the industry, especially in the coal abundant areas. Significant use of technology will be in focus for washing coal, lowering ash content and further bringing end to end solution to enhance domestic coking coal production. The government is open to all ideas including opening of closed washeries, leasing out washeries set up by CIL, managing coking coal mines, and integrating technology applications Jain further added.

Welcoming the minister and other dignitaries in the seminar, Pramod Agrawal, Chairman, Coal India Limited emphasised on a four-point agenda of bringing balance between the supply and demand sides of coking coal, delineating the role of private sector, improving the quality by substituting low-grade coal, and bringing high focus on technology integration.

Technical sessions on demand and supply of coking coal to steel sector, beneficiation of coking coal, technology upgradation for steel, panel discussion, CEO session and question answer sessions were the highlights of the crucial one day workshop.