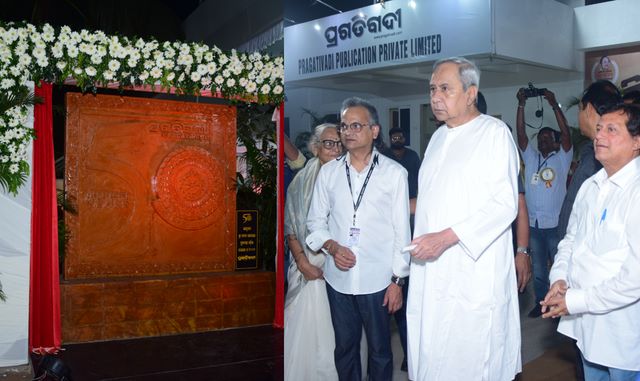 Bhubaneswar: Chief Minister Naveen Patnaik on Monday unveiled ‘The Pragativadi 50 Years Logo’ on Monday. The logo crafted in sand stone has been installed on the premises of the Pragativadi.

He also inaugurated the Golden Jubilee Hall christened ‘Growth Pragativadi’ inside the building of Pragativadi publication.

Later, the CM addressed a gathering at 90th birth anniversary of the founder of Pragativadi and eminent socialist, statesman and philanthropist Pradyumna Bal, which coincided with the golden jubilee year of the Pragativadi.

Addressing the congregation, the CM lauded the Pragativadi’s founder for his continuous endeavor to establish social values.

“Pradyumna Babu was a man of strong determination and high principles.  All through his life, he endeavored to establish democratic values in society.  His uncompromising struggle to establish probity in public life, freedom of speech and journalistic ethics will continue to inspire the journalists of the current and future generations”, Patnaik said.

Patnaik, in his key note address, said “Pragativadi has stood the test of time and has become the voice of voiceless”.