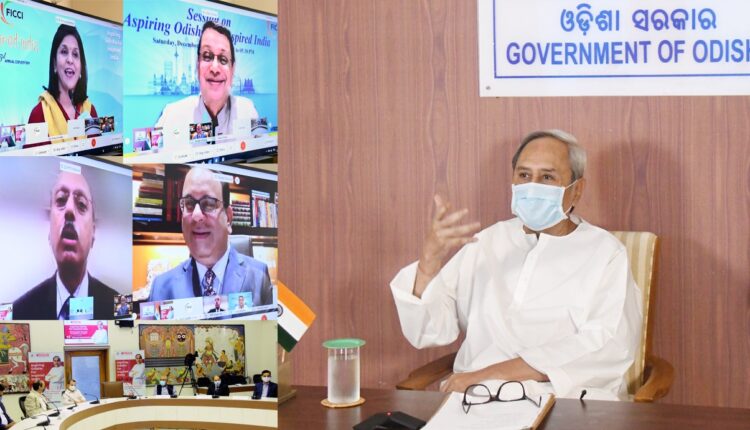 Bhubaneswar: Chief Minister Naveen Patnaik addressed the 93rd Annual general meeting of Federation of Indian Chambers of Commerce & Industry (FICCI), today and highlighted Odisha’s industrial growth in the last two decades by pursuing of sound industrial policies and transforming of the state by value-addition to the vast natural resources it is endowed with.

The session started with the welcome address by Dr Sangita Reddy, President, FICCI, Joint MD, Apollo Hospitals, who spoke about the investor-friendly industrial climate of Odisha.

This was followed by a video presentation on how the state of Odisha, under the able leadership of Hon’ble Chief Minister has transformed itself into an industrial powerhouse within two decades and how in spite of economic slow down due to COVID-19, Odisha could get very high investments during this period.

Industry leaders Mr Harsh Pati Singhania, MD, JK Paper Limited and  Mr Sandip Somany, MD, HSIL were all praise for Hon’ble Chief Minister, Odisha for his visionary leadership and shared their experiences about robust industrial facilitation in Odisha and the support from the state government for industrial investments.

Hon’ble CM also stated that the state government is embarking upon the second phase of value addition through its vision 2030 plan, which aims at adding up to 50% value to the metals produced in the state, thereby opening up vast vistas for investment in the state.

Concluding his speech, he thanked FICCI for being the National Industry Partner for the 3rd edition of the ‘Make in Odisha’ Conclave and requested them to nominate dedicated sectoral teams to work with the respective departments in the Government of Odisha especially in important sectors such as Food Processing, Chemical, Metal and metal downstream, Textile, Tourism and IT.

Mr Uday Shankar, President-Elect, FICCI offered vote of thanks to the dignitaries and thanked the Odisha Government for helping the industries during the testing times. He also thanked Hon’ble CM for considering FICCI as the National Industry Partner for the upcoming Make in Odisha conclave and assured all the support from FICCI.

Located on the east coast of India, Odisha has a coastline of 480 km along the Bay of Bengal. The modern State of Odisha was formed on 1 April 1936 but its history dates to the era of

Kalinga mentioned in the Mahabharata. Over the years the state has maintained a unique cultural identity distinct from all of its neighbouring States. Traditionally, the State has been known for its mineral and mining strength. Since the turn of the millennium, the focus of the State has shifted to manufacturing and services industrial growth. The State Government has also taken several unique initiatives to ensure that a hassle-free and conducive business environment is provided to the investors setting up units in the State.