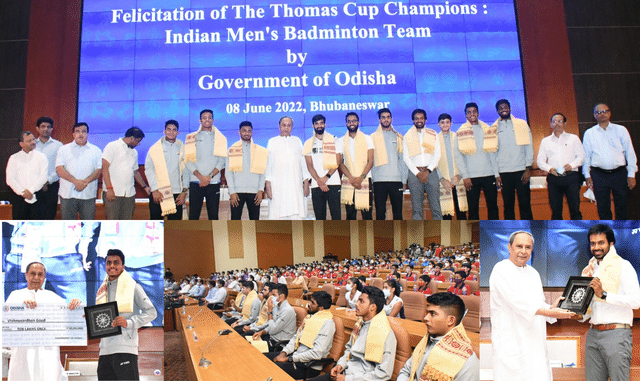 Bhubaneswar: Chief Minister Naveen Patnaik today felicitated Indian men’s team members and coach for the spectacular victory in Thomas Cup 2022. India won this coveted cup for the first time in the history of the Thomas cup championship since it started in 1948-49. Apart from Hockey and Cricket, this is the only the third sporting event where India became the world champion in a team event.

Speaking on the occasion, Chief Minister Shri Patnaik said that India has now become a production centre for world champions in badminton. It is the dawn of a new era of Indian domination in badminton. Across the country there is great interest among the kids and parents in badminton, he added.

Congratulating the Indian team players and coaches on becoming the World Champions, he said that it’s a historic achievement and proud moment for the entire country that our boys have become World Champions in a tough sport like badminton.

A decade back, he said, it was unthinkable that India will start to dominate a sport like a badminton. Thanks to the dedication and commitment of coaches like Gopi Chand and the support of the Badminton Association, Central and State governments, India has been able to consistently perform well on the international stage in the last 10 years, he added.

Speaking on the state’s effort to promote badminton, he said that in Odisha also, we are investing hugely in Badminton. In partnership with Sri Gopi Chand, a state-of-the-art High Performance facility will be launched in the next few months. We are constructing 89 Multi-purpose indoor halls across the State. These will primarily cater to the development of badminton in the state. Many champions will emerge from Odisha in the coming years, he hoped.

We would also like to host the Odisha Open as an annual event and support more such international championships, he announced. He wished the team more success in future championships.

Replying on behalf of the champion Indian Badminton team Chief National Coach Pullela Gopichand in his address said that while every state promotes their own sports persons, Odisha is the only state that is promoting all sportspersons across the country. Odisha is one of the pioneers in the promotion of sports now. ‘This celebration is an inspiration for us. So, thank You Odisha for this big support,’ said an elated Gopichand.