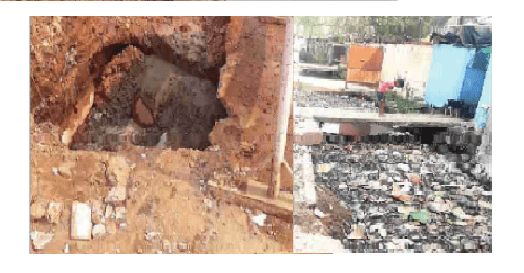 Cuttack: Residents of ward no. 21 of Cuttack city levelled several complaints regarding civic issues, including poor sanitation, overflowing of drains, and mosquitoes. Traffic woes due to the dug up roads are also causing problems to them. Locals are forced to live under difficult conditions due to the lackadaisical approach of the Cuttack Municipal Corporation (CMC), sources said.

Reportedly, the residents alleged that the roads at Ward no 21, that were dug up around 15 days back, remained uncovered and unattended ever since, as locals feared risks to the lives of commuters passing by.

Besides, the clogged drains have now breached onto roads making the atmosphere foul and unhygienic.

On being asked, few locals gave their statements in this regard.

“Roads were dug up around 15 days back. However, the roads were remained unfilled due to careless work of authorities, which leads to risks of accidents in this area. The main drain also remained clogged. Even after repeated complaints, the authorities are not taking any steps to solve the grievances,” said  Shridhar Ghadei, president of Mathasahi.

Another local Panchanan Das alleged, “The cleaners/sweepers working under CMC are not coming regularly following which, the drains remain jam-packed with trash which further leads to an unhygienic living environment.”

“The open drains also led to a rise in mosquito breeding,” said Ranju Das, resident of the locality.

Even after having the congress and Barabati MLA’s office in the same area, CMC authorities are not looking into the problem, locals alleged.