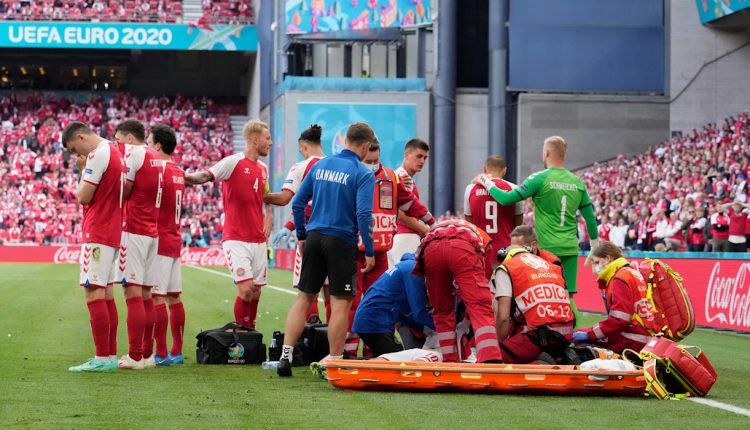 Christian Eriksen is reported to be in stable condition and undergoing tests in hospital after he collapsed in the 43rd minute of Denmark’s opening Euro 2020 game against Finland on Saturday 12 June.

Teammates beckoned the medical staff to the pitch immediately when they saw Eriksen fall to the ground without any contact and remain motionless and unresponsive.

As his teammates formed a circle around him in Copenhagen’s Parken Stadium, the medical staff administered CPR and appear to have revived the player.

He was taken on a stretcher from the stadium around ten minutes later and transported directly to hospital.

Confirmation from the official Twitter account of the Danish Football Association reported that: “Christian Eriksen is awake and is undergoing further examinations at Rigshospitalet.”

After Eriksen had been carried off UEFA announced that the game had been suspended. “The UEFA EURO 2020 match in Copenhagen has been suspended due to a medical emergency,” UEFA said in a short statement.

The game started with a carnival atmosphere but fell silent after the 29-year-old fell to the ground near the end of the first half.

After an emergency meeting between players and officials of both teams at 7.45pm, an agreement was reached to complete the match starting at 8:30pm local time in Copenhagen (CEST).