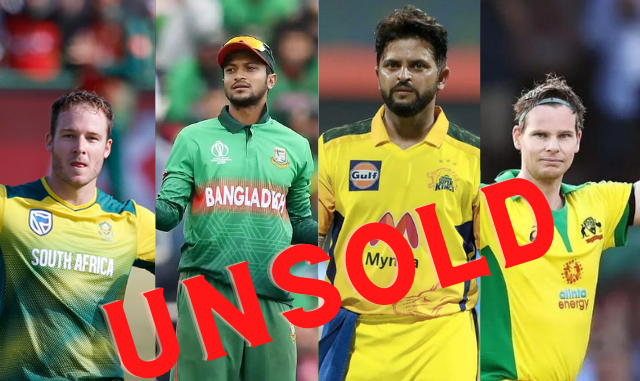 Suresh Raina, who is known as Mr IPL, had a base price of INR 20 million (Rs 2 crore), however, failed to draw a single bid in the auction proceedings in Bengaluru.

While the likes of Shreyas Iyer, Harshal Patel, and David Warner led to some intense bidding wars, there were several renowned cricketers who failed to attract buyers on the first day of the auctions. However, they are expected to get picked in the accelerated round of bidding on Sunday.

Earlier, Suresh Raina kept a base price of Rs. 2 crore for himself. The left-handed batsman was part of Chennai Super Kings (CSK) in the previous season. Like MS Dhoni, Suresh Raina had also been an integral part of CSK over the years. Raina joined CSK in the debut edition in IPL 2008 and was part of the franchise till the 2021 season. However, when CSK was banned in the 2016 and 2017 seasons, Raina played for Gujarat Lions.

Raina has amassed 5,528 runs in 205 matches at an average of 32.51 and strike rate of 136.73. It was expected that CSK would still go for the ‘Chinna Thala’ in the auction proceedings, but the former India international failed to grab any bid in the mega auction; making heads turn.

Next in the unsold list of players was ace South African batter David Miller (base price Rs 1 crore), who represented Rajasthan Royals in the previous edition. He has played 89 games and has 1974 runs to his name, including 10 half-centuries.

To everyone’s surprise, Australia batter Steve Smith also missed out on a contract at the auctions. He registered himself for the auctions at a base price of Rs 2 crore. Despite having prior captaincy experience in the tournament, none of the franchises showed interest in buying him in the first round. Smith has played 103 games in the IPL, scoring 2485 runs, and also has a century and 11 fifties to his credit.