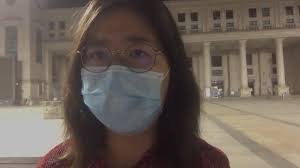 New Delhi:  A Chinese citizen journalist who dared to report on Covid pandemic from the epicenter Wuhan, has been jailed for four years.

The Chinese court has pronounced the judgment to the effect on Monday. The court mentioned that Zhang Zhan had circulated “false remarks” online on the matter.

The verdict came weeks before an international team of World Health Organization(WHO) experts that is expected to arrive in China to probe Covid-19 origin.

Four citizen journalists were also detained by Chinese authorities in this connection. The former lawyer Zhang Zhan was the first one to face trial.

Her live reports and essays grabbed the attention of authorities in February when they went viral on social media platforms.

Notably, there are major concerns over the health of 37-year-old Zhang, who started a hunger strike in June. She is being force-fed via a nasal tube. She thinks she will die in prison.