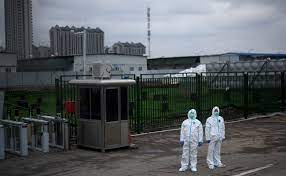 Beijing/Wuhan: China has honoured Wuhan-based bio-lab virologist even as a WHO team arrived in the Chinese city to probe the origins of coronavirus.

Shi Zhengli from the Wuhan Institute of Virology(WIV) is known as ”Bat Woman” for her passionate research into bats and viruses.

Liu Lijun, director of the National Commendation and Rewarding Office of the Ministry of Human Resources and Social Security, said Shi was honoured along with 20 advanced workers.

Due to media coverage worldwide, Shi disappeared for months amid rumours that she had defected to West.

Outgoing US President Donald Trump has called Covid as China virus that emanated from Wuhan killing millions of lives and shattered global economies.

But, the official Chinese media denied reports of her defection to the West and questioned President Trump’s allegation that the virus emerged from Wuhan. The WHO experts are currently put up in a hotel in Wuhan to serve 14-day quarantine.