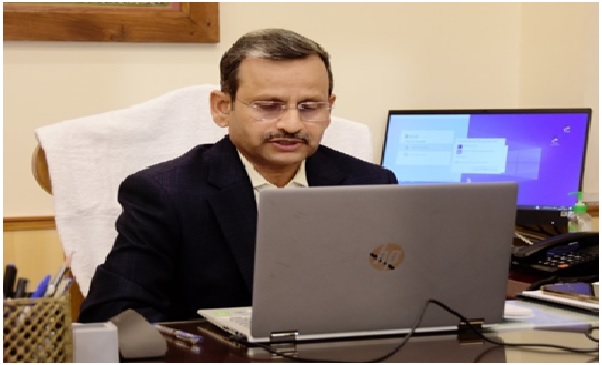 Bhubaneswar: In another step towards opening new avenues for paddy farmers of Odisha, an interactive session with different stakeholders for promoting rice export from Odisha was held recently in the digital mode under the Chairmanship of Chief Secretary Suresh Chandra Mahapatra from State Lokseba Bhawan wherein Principal Advisor to Chief Minister and Chairman of Western Odisha Development Council (WODC) Asit Tripathy along with senior officers from Agricultural and Processed Food Products Export Development Authority (APEDA)  of India, agricultural scientists, and rice exporters participated in deliberations.

Considering the paddy production potential of Odishan agro-climatic zones, the existence of huge genetic diversity of aromatic germplasm, the traditional skill of the farmers, and availability of port facilities for foreign trading, Chief Secretary Suresh Chandra Mahapatra directed to “create conducive eco-system for boosting up the export of non-Basmati aromatic rice from Odisha”.

Principal Advisor to Chief Minister, Asit Tripathy said, “Odisha as a rice surplus State has bumper availability for export. There are also rice aggregators in Odisha who can be trained and mobilized towards export-oriented operations”. He advised APEPA of the Government of India and Directorate of Agriculture, Odisha to organize ground-level workshops with rice aggregators, food exporters, and farmer producer organizations to infuse confidence in the farming community for production of export quality paddy.

Further, Chief Secretary Suresh Mahapatra has directed to adopt a cluster approach in the promotion of the non-Basmati aromatic verities of paddy cultivation. He also directed to identify the agro-climatic zones more suitable for the cultivation of such varieties. Mahapatra added, “Government of Odisha is committed to enhancing farmers’ income by boosting the rice export, and State will provide all possible support for the purpose”.

Mahapatra also asked the department of agriculture and farmers’ empowerment to constitute a resource team for boosting the rice export. It was also decided that the team would visit Andhra Pradesh for gaining exposure to the actual practices adopted in the export of non-Basmati aromatic verities.  Chief Secretary directed the department to frame a realistic work plan with the suggestions from the technical session of the seminar, and inputs from the resource team so that those could be carried forward.

The requirements like the establishment of a laboratory network in Odisha, creation of a rice warehouse at Paradip port, creation of awareness about Indian and global food practices among the farmers, an extension of necessary agri-inputs and technical support to the farmers for production of the non-Basmati aromatic paddy, etc were also discussed in the meeting.