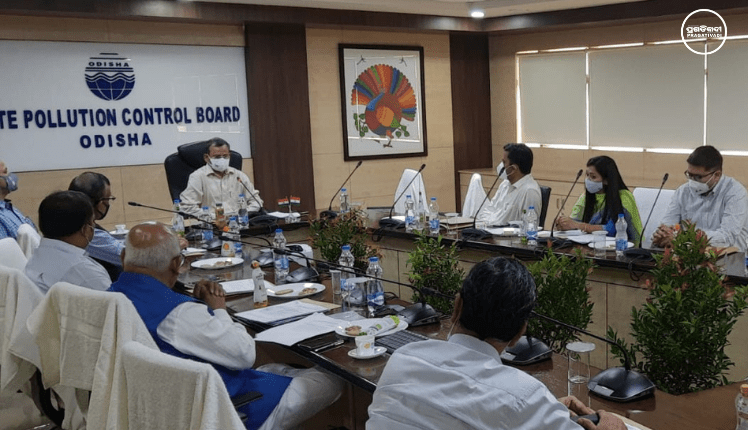 Bhubaneswar: Chief Secretary Suresh Chandra Mahapatra has directed the Odisha State Pollution Control Board (OSPCB) to make people aware of the contributions of urban forests towards the healthy life of the denizens. Mahapatra gave this direction while presiding over the Board meeting held in its conference hall wherein Member Secretary SPBC outlined the issues for discussion on Thursday.

Reviewing the progress made in curtailing pollution generated from various sources, Chief Secretary directed to keep up the campaign for clean air in the cities and industrial towns. He said: “The urban forests have great contributions towards healthy lives of the denizens, maintenance of the ambient air quality, groundwater level and biodiversity in the cities. Besides, it adds freshness to the developmental interventions and promotes a green-ecosystem in the locality”. Mahapatra added, “The urban forests like Bharatpur sanctuary, Ekamra Kanana, Jayadev Vatika and Chandaka have immensely contributed towards the enrichment of human life in a number of ways.”

Further, Chief Secretary directed the Board to strictly enforce the pollution control measures in the aluminium smelter plants operating near Hirakud. He directed to ensure zero discharge of the fluoride by these industries to the reservoir. Mahapatra said the industries should properly dispose of the generated fluoride within their own campus without contaminating the groundwater of the area. The Board was also asked to conduct a detailed study on the waste discharge by these industries and its impact on the wildlife.

The issues relating to the development of air quality and monitoring of air pollutants generated by the industries were figured in the meeting. It was seen that following earlier instructions of the Chief Secretary, 145 industries put under 17 highly polluting categories were instructed to install high-density internet-based surveillance cameras at suitable locations for viewing of the stag and fugitive emissions.  So far 24 industries installed the cameras. These cameras were connected to the remote monitoring Control Room set up in the Head Office of the Board at Bhubaneswar. Other 61 industries were in the process of installation of the cameras. Mahapatra directed that balance industries should fix the cameras on a time-bound manner.

Other important matters discussed in the meeting included implementation of the clean air programme in Ekamra Kshetra (Bhubaneswar), and development of the Geodatabase for environmental mapping in critically polluted areas of the State. It was decided that out of several global level air pollution management models, the technique of less emission zone (LEZ) would be more effective for Bhubaneswar. Chief Secretary directed to make the action plan more collaborative through active involvement BMC, SPCB, departments of Works and Tourism and the local residents. The action plan would target the monitoring of air quality through systematic interventions.

The Member Secretary SPCB Dr K. Murugesan appraised that as per earlier instructions of the Chief Secretary Geodatabase for environmental mapping and web-based GIS application were rolled out in Talcher. The system would also be put in place for the industrial areas in Rourkela, Keonjhar, Balasore, Kalinganagar, and Angul. Through the system, the pollution generation and disposal by the industries could be monitored through a web-based online system from the Control Room itself. The proposals regarding delegation of more powers to the regional offices for quick decision making and expeditious implementation were also approved by the Chief Secretary in the meeting.