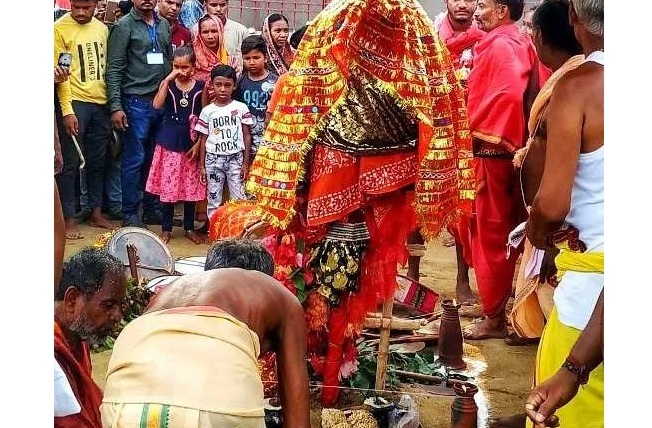 Bhawanipatna: The annual Chhatar Jatra of goddess Manikeswari, the presiding deity of Bhawanipatna town in Kalahandi district, has begun under strict COVID protocols.

As per the decision, no devotee will be allowed to enter the temple nor to take part in rituals during the event. Apart from this, Section 144 has been clamped in the town till 4PM today.

Besides, all the entry points to the town have been sealed and 10 platoons of Police forces have been deployed to deal with any possible law and order situation during the Jatra.

As per the long-followed customs, a ceremonial Chhatar (umbrella) of goddess Manikeswari is taken out from the temple early in the morning to Jenakhalo–located on the outskirts of Bhawanipatna following the performance of secret rituals at the temple. The return journey of the Chhatar to the temple is known as Chhatar Jatra.

The deity was taken to Jenakhala in the suburbs of Bhawanipatna at midnight yesterday after completion of ‘Shodasa Puja’ ritual.

On the other hand, animal sacrifice, which is a major part of the festival, has been banned. Kalahandi Collector, Gavali Parag Harshad has discouraged public to stay away from the practice.

As per tradition, the head of the Devi is removed at midnight and replaced by a terracotta head studded with gems and ornaments. The old head is then immersed in the Purushottam tank adjacent to the temple.

This placing of the terracotta head may seem surprising. But it may be noted that Maa Manikeswari is headless and hence identified with Devi Durga’s Chhinnamastha avatar. Her body is like a cylindrical structure, over which a clay head is fixed. Thereafter, the body is covered with clothes and ornaments. After Nava Kalebara, Maa returns to her temple on Navami tithi, marked as Chhatar Jatra.