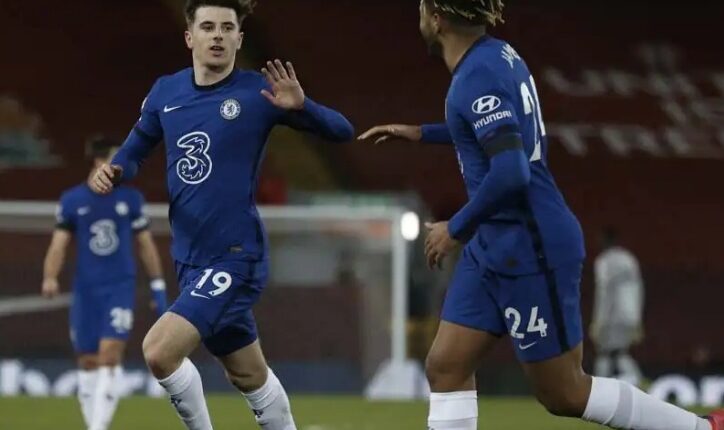 The Blues continued their impressive performance under new coach Thomas Tuchel – seven wins and two draws – at the expense of a struggling Reds side that have now lost five in succession at Anfield, the worst run of home form in the history of Liverpool Football Club.

Chelsea are unbeaten in 10 games in all competitions since the former Paris Saint Germain boss replaced the sacked Frank Lampard in January.

While Chelsea are on the up, injury-hit Liverpool crashed to a fifth successive home defeat for the first time in their illustrious history, leaving the spluttering champions without a win at Anfield since before Christmas.

After Chelsea’s Timo Werner was denied by the narrowest of offside decisions, Liverpool’s Sadio Mane missed a sitter.

Chelsea took the lead in the 42nd minute when N’Golo Kante launched a high pass towards Mount and the England midfielder cut in from the left, leaving Fabinho trailing in his wake before curling a superb finish into the bottom corner.

Liverpool didn’t have an effort on target until the 85th minute as Klopp surprisingly hauled off leading scorer Mohamed Salah.

Everton made it three consecutive victories with in-form Richarlison, while their improving defence recorded a third successive clean-sheet.