Puri: This year’s Rath Yatra of Puri Jagannath Temple is scheduled to be observed on July 12. The construction of chariots commenced on the occasion of Akshaya Tritiya on May 15.

According to SJTA, the “Chaka Dera” and “Diga Nirnaya” of the three chariots at “Ratha Khala have been completed. The “Bindha Khodei” work on the “Garagara”, 2 for each chariot along with the construction of “Jokha”, 7 for each chariot are also over. 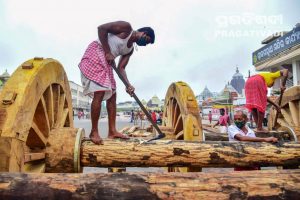 “Dhamaka Chaupata” work is on its final stage, the construction work of “Sinhasana” and “Prabha Apasara” have also commenced, the SJTA informed. 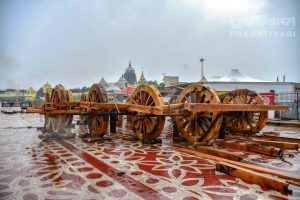 Ratha Yatra, also known as Jagannath Rath Yatra, is an important festival of Hindus that is organized each year at the famous Jagannatha temple in Puri, Odisha.

It is one of the oldest rath yatras in the world. On this day, the idols of Lord Jagannath and his siblings (Goddess Subhadra and Lord Balabhadra) are decorated and brought to cover a 3-km-long journey (from Jagannath Temple to the Gundicha Temple) in chariots drawn by over hundreds of devotees, every year.

There Is No Cyber Breach Into NIC Email System, Clarifies Centre

Four Held For ‘Gangrape & Murder’ Of…