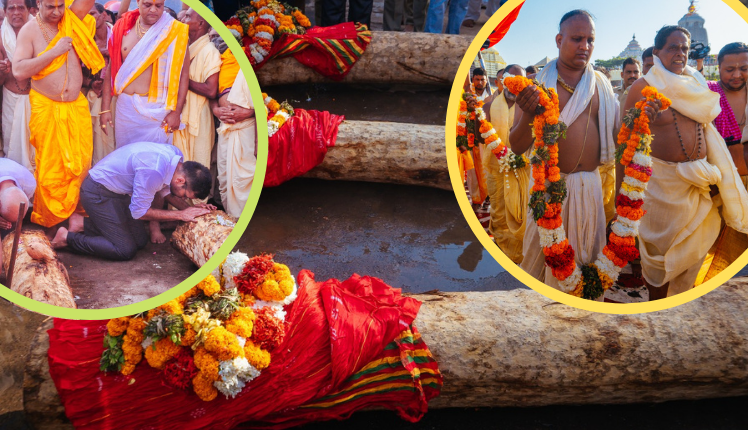 Puri: Construction of chariots for the annual rath yatra of Lord Jagannath and his siblings began on Tuesday on the auspicious occasion of Akshaya Tritiya.

After getting the ‘Aagyan Mala’ (permission garland) from the deities followed by special rituals conducted by the temple priests, the three 12 ft logs of ‘dhaura katha’ (specific logs) were brought to the ‘ratha khala’ near the Jagannath temple.

Three logs of ‘dhaura’ variety wood were consecrated at the temporary shed erected in front of the Shree Jagannath Temple Administration (SJTA) office as per Banajaga rituals.

The temple priest, the Puri titular king’s ‘rajguru’ and brahmins well versed in the Vedas conducted a ‘yagna’ at the specially built ‘yagnashala’. Oblations were offered to Lord Nursingha during the yagna as part of the consecration process of the three logs.

Earlier, keeping with the tradition, the temple priest while chanting Maa Dakshin Kali’s mantra had symbolically chopped three logs of the ‘asan’ variety using three small axes made of gold.

Subsequently, the logs were handed over to Maharana sevayats (carpenter servitors) for undertaking the construction of chariots for Rath Yatra.

Here Are Five Best Dogs For Your Kids & Families