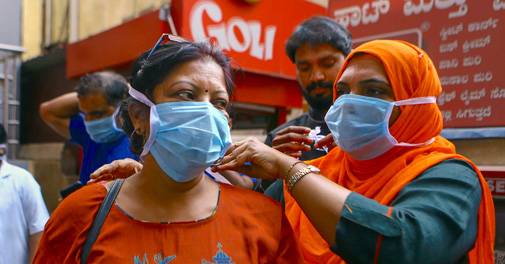 New Delhi: The Union Government has asked states and Union Territories (UTs) with large numbers of daily new Covid-19 cases in well-defined Geographies (cities/districts/areas) with more than 10 per cent test positivity or 60 per cent bed occupancy.

The Union health ministry said all districts where the test positivity, the proportion found Covid-19 positive among those tested, is 10 per cent or higher for a week or where oxygen support of intensive care unit bed occupancy is 60 per cent or higher should consider these measures.

The focus would be on “containment” to flatten the epidemic curve through multiple measures, including night curfews and a ban on social, political, sports, entertainment, academic, cultural, religious, or other similar gatherings and congregations.

“Local containment primarily focused on restricting intermingling of people is to be undertaken for a period of 14 days for breaking the chain of transmission duly following epidemiological principles. Classification of districts requiring intensive action and local containment is also to be undertaken by the State on a weekly basis,” Centre advised.

For clinical management, Centre advised that analysis to be undertaken with respect to requirement of health infrastructure so as to manage the present and projected cases (next one month) and necessary action initiated to ensure sufficient oxygen-supported beds, ICU beds, ventilators, ambulances including creation of makeshift hospitals, as needed.

Essential services, including healthcare, police, fire, banks, electricity, water, and sanitation, and public transport needed for these services will continue, the government said in a statement released on Sunday night.

The Centre further advised that the spread of the infection has to be controlled through restricting the intermingling amongst people, the only known host for the Covid-19 virus.

Half-Naked Body Of Woman With Hands Tied Recovered From Pond