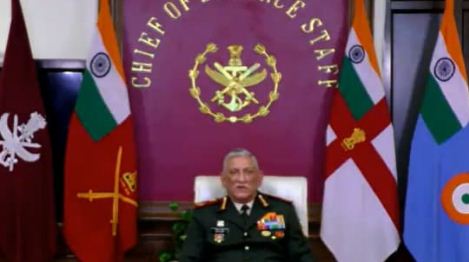 New Delhi: A pre-recorded message of Chief of Defence Staff (CDS) General Late Bipin Singh Rawat, who martyred in a military chopper crash earlier this week, was played on the occasion of ‘Swarnim Vijay Parv’ at India Gate lawns in the national capital.

This message was recorded on December 7, days before the military chopper crash. In a 1:10 minute-long clip, Rawat had extended his warm greetings to all the brave soldiers of the Indian Army.

“We are celebrating the 50th anniversary of the victory of the Indian Army in the 1971 war as Vijay Parv. Remembering the brave soldiers of the Armed Forces on this holy festival, I pay tribute to their sacrifices,” he had expressed.

He had further added that from December 12 to 14, various programs are being organized at India Gate.

“It is a matter of great fortune that Vijay Parv is being organized in the shade of the flame of Amar Jawan Jyoti, which was established in the memory of our brave martyrs. We invite all the countrymen to participate in the celebration of this victory festival,” he had added.

It is pertinent to mention that, India’s Chief of Defence Staff General Bipin Rawat, his wife Madhulika Rawat, and 11 others were killed in a chopper crash near Ooty in Tamil Nadu on Wednesday. The chopper was heading to the Wellington defence establishment. While the last time a chopper crash involving a senior Army officer was in 1993, similar accidents have led to the deaths of several political leaders.

Man Shot At During Loot Bid By Miscreants In Ganjam, Hospitalised