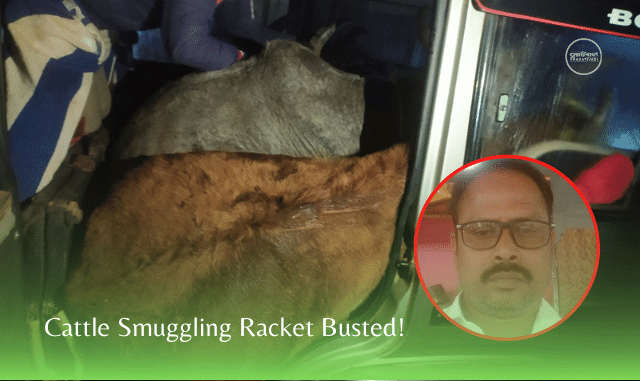 Deogarh: Deogarh Police on Friday claimed to have busted a notorious cattle smuggling racket with the arrest of its kingpin from Bhadrak district.

According to police sources, during the period between 27th January and 15th February 2022, a total of eight cases of cattle theft were lodged with Deogarh Police Station. The thefts were reported from Kharumunda, Kapasari, Kureibahal, Kaunsibahal, Gopalapali, and Patrapali villages.

Following the complaint, Deogarh Police intensified night patrolling and took up an investigation. On the night of 15th February, police intercepted a pickup van and rescued five cattle but the driver of the vehicle managed to give a slip.

During the investigation, police identified the cattle smuggling racket’s kingpin, SK Abu Raza, a native of Haladidiha village under Old Bazaar PS limits in Bhadrak district, and two of his aides, SK Hidayat and Ghulam Mustafa, both hailing from Tentaposhi village under Badampahada PS limits in Mayurbhanj district.

The operatives of the racket used to steal cattle from the sheds in the villages and sell them in Mayurbhanj. They used to smuggle the cattle in a pickup van, which has been seized, the police sources said.

“SK Abu Raza, kingpin of the cattle smuggling racket, was arrested from Bhadrak and forwarded to the court today,” a police official said.

Two other aides of Kingpin Raza’s are on the run to evade arrest and efforts are on to nab them, the police official added.

Indian Embassy In Ukraine Continues To Function With 24X7 Helpline