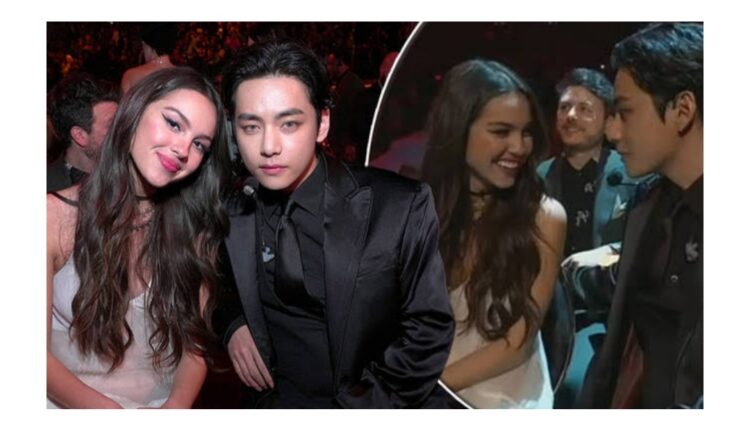 BTS’ V reveals what he whispered to Olivia Rodrigo at Grammys 2022, says he cried after group didn’t win award

Las Vegas: BTS’ social butterfly Kim Taehyung aka V set the stage on fire along with the rest of the embers with their performance at the Grammys 2022. However, his opening act with Olivia Rodrigo became one of the major highlights of the night and ARMYs couldn’t get over his flirtatious looks.

V has revealed what he whispered in singer Olivia Rodrigo’s ear at the 2022 Grammy Awards. Taking to Weverse, V also revealed his reaction after the group didn’t win the best pop duo/group performance award.

As translated by ARMYs, V’s reply was, “Just that it’s important business. Us masters/aces know it well, right. It wasn’t even English.”

Another fan later added that Olivia acted so surprised after hearing Korean and Tae revealed that he did not speak Korean as well. So what exactly did he say? Tae did not answer that clearly but called Olivia a hero when an ARMY praised her acting skills.

BTS members–RM, Jin, Suga, J-Hope, Jimin, V, and Jungkook were nominated for the award for their English single Butter. However, they lost to Doja Cat and SZA.

Answering a question about the Grammys, Tae said that he cried afterwards. A fan asked, “Oppa, were you not sad that you weren’t able to get an award at the Grammys? Let’s definitely get one next time sobsob”

V answered, “Doja’s song was really good so this is right it was clean.” “But I cried.”