Seoul: BTS’s V, aka Kim Taehyung, has always made headlines for creating and breaking records on social media.

According to WikiProject Korea, V became the Most Searched Individual K-Pop Idol (10th overall) on Wikipedia in August with 283,934 visits.

On June 27, 2021, the Butter Concept Photo Version 1 of all the members of BTS was uploaded on the official Instagram handle of BTS (@bts.bighitofficial). Among all the members, V’s picture is the most liked & commented on the platform, and the first to reach 10M likes and 1M comments.

V once again proved his unparalleled popularity as SNS King by recording the #1 personal page views of Korean artists in the official ranking of Wikipedia for the month of August. This makes it his 3rd month in a row to take the #1 spot for an individual.

Despite being inactive in SNS, V recorded a total of 283,934 visits in the ranking of Wikipedia’s Korean Project Page (English version), ranking 1st for individual & team. 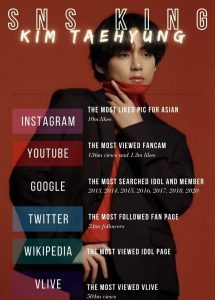 The Bitcoin price is ready for a breakout

Physical Classroom Teaching In Colleges And Varsities To…

Reasons Why You Should Add Kale To Your Diet