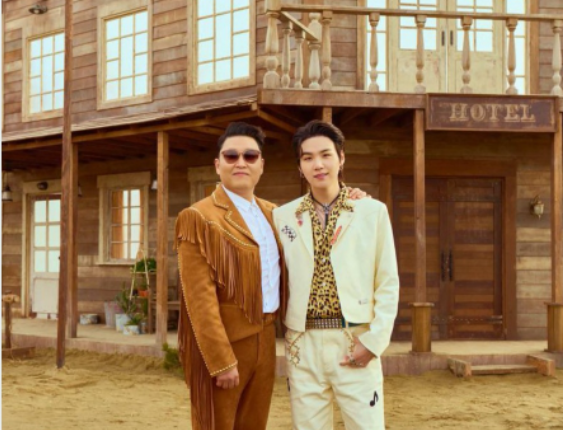 Seoul: BTS’ Suga (born Min Yoongi) gave his fans a special surprise when he decided to make an appearance at PSY’s Summer Swag 2022 concert in Seoul, and joined him for their hit collaboration That That. And that was enough for the crowds to scream Marry Me Yoongi, as Suga danced with full zest to That That and even dropped the mic, making fans recall his epic Mic Drop performances where he would throw the mic after he was done.

About 30,000 spectators gathered at the scene were enthusiastic about the unexpected appearance of SUGA, as well as the BTS’ fandom ARMYs who heard the news through social media, etc., were excited online.

THE SCREAMS FOR MIN YOONGI, HIS ENERGY, HIS PERFORMANCE , HIS DANCE MOVES , THE MIC DROP AT THE END, CUTE interaction with PSY, OH GOSH I AM GOING INSANE HERE! pic.twitter.com/FtivMFFlq3

SUGA and PSY teamed up for the first time with the title song ‘That That’ of PSY’s ninth full album ‘PSY (9)’, which was released on April 29 after 5 years. ‘That That’ was co-produced by SUGA and PSY and wrote, composed, and arranged the song together. In addition, SUGA also featured and appeared in ‘That That’ music video together.