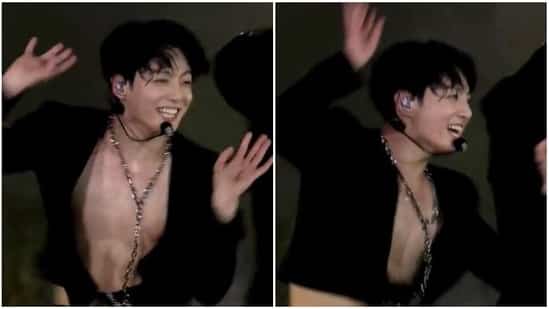 Seoul: BTS returned to the stage on Sunday on the final day of their Permission To Dance on Stage concert in Seoul.

The concert had many special moments from the members singing Spring Day to scolding RM as he yawned on the stage. However, Jungkook and his struggle with his blazer button caught ARMY’s eyes.

During the performance of BTS’ song Fake Love, the members wore their iconic black outfits–blazers and pants. While some of the members had T-shirts under their jackets, Jimin and Jungkook opted for only the blazers.

At one point while dancing, Jungkook’s blazer button popped open.

The youngest BTS member kept on trying to fix the button and after a few tries succeeded. However, the button opened again and he was seen fixing it.

the fact that jungkook's blazer opened twice and he tried to button it each time pic.twitter.com/cKFbiPGr27

SC expresses concern over fake Covid death certificates; indicates that it may order a probe into it by CAG