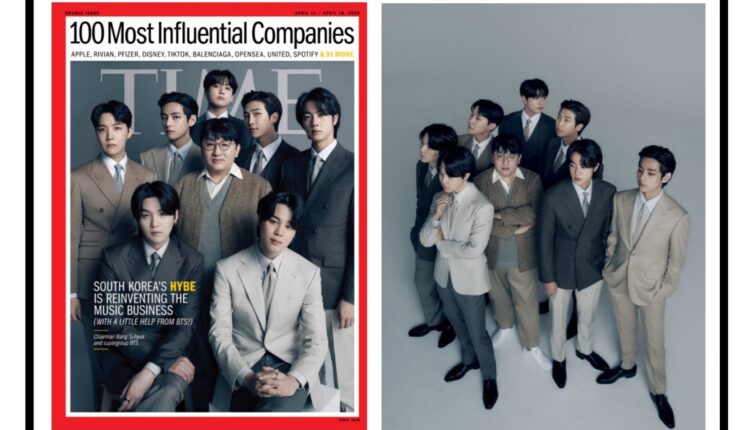 Seoul: For the second year in a row, BTS label HYBE has made it on to TIME magazine’s list of the 100 Most Influential Companies in the world. The list highlights 100 businesses in a diverse array of industries that are shaping the future. According to the magazine, the 100 companies that made the list are chosen based on factors such as “relevance, impact, innovation, leadership, ambition, and success.” In honor of making it on this year’s list, BTS and Bang Si Hyuk decorated the cover of TIME magazine.

Sharing the cover, Time wrote on Instagram, “Despite the setbacks brought on by the pandemic, BTS — and the company behind them — has thrived. That ongoing success is a direct product of the shrewd management agency that backs them, writes Raisa Bruner. Initially founded as Big Hit Entertainment in 2005 by musical mastermind Bang Si-hyuk, the company listed publicly on the Korean exchange in 2020 as HYBE; it’s valued at $9.5 billion today.”

“HYBE is not just a record label or a management company. ‘HYBE’s vision has always been ambitious—to the point of being presumptuous,’ says Bang over Zoom from its headquarters in Seoul. ‘Our vision is to become the world’s leading entertainment lifestyle platform, with music as our foundation’,” the post read.

Hybe had been named among TIME Magazine’s list of 100 Most Influential Companies in 2021 as well, along with some of the most powerful names in the world such as Apple, Delta, Sony Music Group and Twitter. Last year, Time had mentioned HYBE as a pioneer for “Creating a BTS-fueled empire,” likening it to entertainment conglomerate Disney. HYBE and Samsung were the only Korean companies that made it to the list in 2021.

Bang Si Hyuk elaborated that the company was able to succeed even during the pandemic because of HYBE’s business structure, remarking that the value chain should be expanded and that their business prioritizsd the music. TIME magazine also states that HYBE differentiated itself by “investing in technology that makes it possible to stream concerts virtually and own the artist-fan relationship, from ticketing to merchandise shops to live artist broadcasts, shows, and message boards.” HYBE is currently working on releasing Weverse 2.0, which will integrate V LIVE, in the first half of this year.

Furthermore, HYBE is building their “Original Story Business” through the release of their own webtoons and web novels. Bang Si Hyuk emphasizes, “The essence of our company is IP—we are a music business company,” placing significance on the music as the foundation.

Minor Boy Dies After Being Hit By Freight Train In Koraput