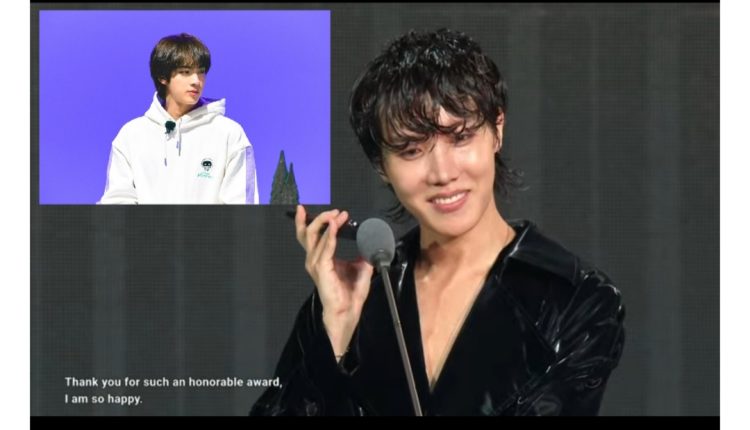 Seoul: BTS set a new milestone and became the first to receive the MAMA Platinum award for winning all four Daesangs at once.

This year, BTS was given the special ‘MAMA Platinum’ award, a new award given to artists who have won all four Daesangs at once at MAMA.

Although the whole group was not able to attend, J-Hope went up on stage to receive all the awards representing the group. During the acceptance speech for the MAMA Platinum award, J-Hope made a surprise phone call to Jin.

“It’s getting cold so be careful not to catch a cold. Don’t get sick stay healthy. I won’t be making a public appearance for a while but I will come back with great music soon. I’ll go to the military safely!” pic.twitter.com/CLTKmOOqEo

J-Hope could be seen picking up his phone and called Jin who is gearing up for his military service. Dialing him up, J-Hope said, “It would have been really really nice if the members could come up and express their gratitude as well, and it’s a shame they weren’t able to. Actually, I’ve prepared one thing. Jin said he had something he wanted to say so let me quickly call him.”

As soon as Jin received the call, there was a loud cheer from the crowd and J-Hope could be heard saying, “I’m doing my award acceptance speech right now, but could you just say one thing? There are many fans who want to see you.” To this, Jin then said, “Hello everyone, it’s BTS Jin. I thank you so much for giving us an honorable award, and.. our army!! Our armys, thank you so so much and I love you. and our members, you’ve always worked hard. Our members, I love you so so much too.”

Jin further continued and promised that he would come back soon with more good music. He could be heard saying, “The weather’s getting colder, so everyone, please watch out so you don’t catch a cold and don’t get sick and take care of your health. I won’t be able to see anyone at official events now, but I’ll come back next time with good music. Everyone, I’ll go and come back safely from the military! Thank you!”

Many fans were happy and touched to hear Jin’s voice at the award ceremony and expressed how grateful they felt towards both J-hope and Jin, who left a heartwarming message to fans.