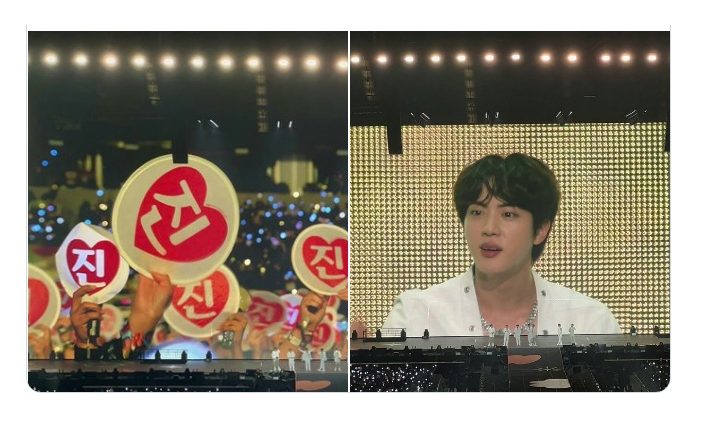 BTS Army Surprise Jin at SoFi Ahead Of Birthday, Singer Says ‘I Love You’

Los Angeles: BTS member Jin, who is all set to celebrate his 29th birthday on December 4, received a sweet pre-birthday surprise from ARMY.

During the 4th day of the Permission To Dance On Stage concert in Los Angeles, ARMY members at the SoFi stadium held heart-shaped placards with ‘happy birthday Jin’ written on them. The placards left Jin in complete awe who then showered love on his fans and said, ‘Wow! Wow! Thank you ARMY. Wow, so sweet. Thank you ARMY, I love you.’

Seokjin eyes look so innocent. I will always treasure this pic of him.Thank you to the people who supported the project🥰#MoonForJinLA #LAHeartsJin pic.twitter.com/4RU8Zd3xbO

Seokjin you deserve all the hearts, all the love in the world! Precious baby! #LAHeartsJin #MoonForJinLA @bts_twt pic.twitter.com/lkEynQ0q9b

Jin is known to make hearts for the ARMY during concerts. And seeing ARMY’s surprise for him would have been a big surprise for the Epiphany hitmaker. His expressions say it all. Jin’s eyes shone brightest on seeing Moons in the audience.

This is the final leg of BTS’ 4-day concert in LA. Jin won a lot of hearts. Firstly, he made an appearance as the Squid Game doll. His ponytails, and cuteness during the concert melted ARMYs hearts. After today’s concert, BTS will fly back to South Korea.