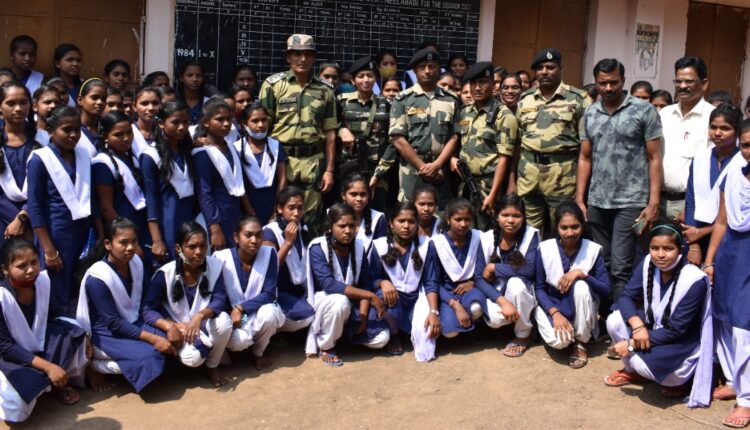 Koraput: An outreach program has been organised by 68 Battalion BSF on the guidance of Madan Lal, DIG Koraput and under supervision of Yoginder Agarwal, Comdt, 68 Bn BSF at SSD Government Girls High School, Nilabari (Bandhugaon Block) of Koraput district in the area of BSF Post Bandhugaon on Monday.

The first woman officer in ANO (Anti Naxal Operations) theatre from BSF Ms Amandeep Kaur, Assistant Commandant conducted a informative and motivational session with students. She emphasised about the importance of education and career opportunities in the security forces. Besides that she also delivered about importance of women in BSF in operational duties in the ANO and on the International border. During the session she motivated the Girl students to join the Security Forces to serve the Nation and develop a unique perspective in life. She assured the aspirants for pre-recruitment training. She answered queries on the procedure of women recruitment in the BSF, their pay & perks, welfare schemes for BSF woman employees and their nature of duty.  The students enjoyed the visuals of ‘SeemaBhawani’ (Mahila Motor Cycle team of the BSF).

About 75 girl students and 23 teachers of the school attended the event, there was a response of standing ovation from the students, teachers and the populace of the interior areas and expressed their Gratitude to BSF for initiating such programs for creating awareness and building confidence in them. Besides, they demanded more such programs in different interior areas so that tribal youth can be lured away from Naxal intent.

Border Security Force (BSF) deployed in Koraput and Malkangiri districts for more than a decade. The Force has been rendering valuable support to the administration of Odisha in tackling the LWE challenge and plays a vital role in containing Maoist activities in the area. The BSF stands on the forefront in operations and apart from this, Civic Action Programme, Medical Camps and Outreach Programme have been organised to win hearts and minds of populace.