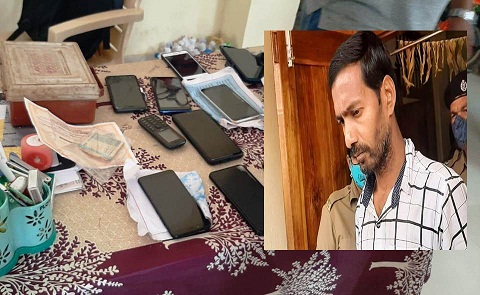 Nayagarh: A man has been arrested by police for peddling 15 grams of brown sugar near Sinduria Bank Square under Town Police Station limits in the district today.

A joint team comprising of Nayagarh Sadar police and Excise mobile squad have arrested the accused, identified as Niranjan Maharana, a resident of the same locality.

Acting on a tip-off, the team conducted a raid and arrested the drug peddler, while seizing contraband and 15 stolen mobile phones from his possession. The estimated value of the seized contraband is over Rs 1.5 lakhs. Besides, the excise department is digging deeper to ascertain others involved in the smuggling, sources in the police informed.

After a brief lull, smuggling of illegal narcotics substances has again surfaced in Nayagarh. The drug mafia are operating right under the nose of the police which has eventually turned the district a hub for drugs trade. While the police and excise personnel are only rounding up the peddlers, the kingpins are lurking in the dark and running the illegal trade.

Reliable sources informed that inter-state drug mafia are smuggling brown sugar and ganja to Phulbani via Nayagarh. The district has turned into a safe haven for smugglers to run their illicit trade by greasing the palm of others.