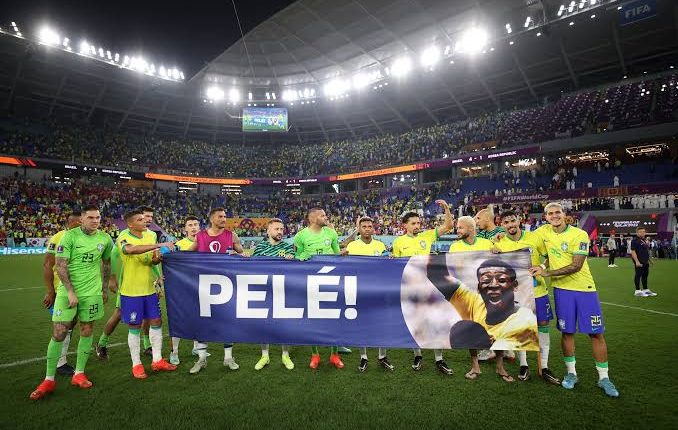 Brazil Pay Tribute To Pele After Dominating Round Of 16 Win; Legend Cheers For Team From Hospital

Sao Paolo: Brazilian Pele was admitted to hospital on Tuesday to revaluate his cancer treatment, but was later on admitted with respiratory problems as per medical reports.

Brazil triumphed 4-1 over South Korea on Monday in a spectacular fashion, thanks to their players’ individual talent as well as collective brilliance. Tite’s side took just 45 minutes to knock Korea almost out of the game displaying sheer dominance in every position. So the remaining half was left to be a mere formality. Following the victory, Brazilian players and the fans present at Stadium 974 paid tribute to their country’s legend Pele who has been hospitalised in Sao Paulo.

In an honourary gesture, the footballers including captain Thiago Silva and Neymar Jr posed in front of a giant poster featuring a photograph of Pele in the yellow jersey after the final whistle. Not only the players on the pitch, but numerous fans gathered at the venue also carried tifo banners wishing a faster recovery of him. Vibrant images of young Pele celebrating goals and lifting trophies with Brazil’s national team could be seen on the shirts, flags, and banners of Brazilian supporters all across the stand.

The crowd behind one of the goalposts hoisted a huge banner in the 10th minute of each half. It depicted an image of Pele in a white jersey with shirt no 10 that he used to wear while playing for the Brazilian club Santos. The fans were also spotted chanting his name when the Brazil side stepped onto the ground.

Considered by many the greatest footballer of all time, Pele was hospitalized in Sao Paulo last Tuesday amid treatment for colon cancer, just as Brazil wage their campaign to win a record-extending sixth World Cup in Qatar.

In a message on Instagram as the “Selecao” prepared for their 4-1 romp over South Korea in the round of 16, Pele said he was watching.

“The King” posted a faded color picture of himself as a baby-faced 17-year-old in Stockholm, Sweden, on his way to dazzling the planet with his extraordinary talent in Brazil’s maiden World Cup championship run.

Eight years earlier, seeing his footballer father cry when Brazil lost the 1950 World Cup final at home to Uruguay, Pele had promised to win the trophy one day.

BrazilBrazil Pay Tribute To Pele After Dominating Round Of 16 Win; Legend Cheers For Team From HospitalFIFA World Cuplatest newspelesports news